MS-13 member gets 45 years in prison for double murder 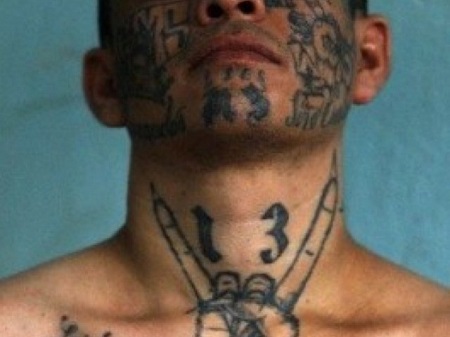 Rene Mendez Mejia, also known as “Zorro,” a member of La Mara Salvatrucha, also known as the MS-13 street gang, was sentenced yesterday to 45 years in prison for the double murder of a young mother and child.

22-year-old Mejia and two other MS-13 members, Adalberto Ariel Guzman and Juan Garcia, shot and killed 19-year-old Vanessa Argueta and her two-year-old son, Diego Torres, in Central Islip, New York, on February 5, 2010, after luring them to a secluded wooded area.  Mejia and Garcia shot Argueta in the head and chest, respectively, and Guzman shot Torres twice in the head.  Mejia and other MS-13 members, including MS-13 leader, Heriberto Martinez, Guzman, and Garcia had plotted to kill Argueta because they believed she had disrespected the MS-13 by sending rival gang members to attack Garcia.

After committing the murders, Mejia and his co-conspirators fled to El Salvador.  Guzman and Mejia were arrested in May 2010 when they returned to the United States, but Garcia remained a fugitive for four years until March 2014, when, after being placed on the FBI’s Ten Most Wanted Fugitives List, he surrendered to law enforcement authorities in Nicaragua, waived extradition, and was returned to the United States for prosecution.  Mejia pled guilty on June 15, 2011.

“Mejia and his fellow MS-13 members brutally and senselessly executed a young woman and her two-year-old child.  While nothing can reverse this tragedy, we hope that today’s sentence and the convictions and sentencings of Mejia’s co-conspirators have brought the victims’ families some measure of justice and comfort,” stated United States Attorney Robert L. Capers.  “My Office and our law enforcement partners will continue to be vigilant and aggressively prosecute the MS-13 and other criminal organizations who unleash violence on our communities.”  United States Attorney Capers expressed his sincere gratitude to the members of the FBI’s Long Island Gang Task Force for their tenacious investigation and unwavering commitment to bring Mejia and his co-conspirators to justice for the Argueta and Torres murders.

“As the last defendant is sentenced for the brutal murders of a young woman and her toddler son by MS-13 gang members, we hope the victims’ family can finally feel justice has been served.  The FBI is committed to working with our partners to not only root-out gangs in our communities but also bring their crimes to justice no matter how long it takes,” said FBI Assistant Director-in-Charge Diego Rodriguez.

“This prosecution exemplifies the ruthless and senseless violence committed at the hands of MS-13 gang members, which threatens the very fabric of our communities.  The Suffolk County Police Department will continue to aggressively work with our law enforcement partners to bring these violent criminals to justice,” stated Commissioner Timothy Sini.

Mejia’s three co-conspirators, Martinez, Guzman, and Garcia were also arrested and indicted in connection with the Argueta and Torres murders.

Martinez was convicted in March 2013, following a six-week trial, in connection with the Argueta murder, as well as the March 6, 2010, murder of Nestor Moreno in Hempstead, New York, and the March 17, 2010 murder of Mario Alberto Canton Quijada in Far Rockaway, New York, and later sentenced to life in prison, plus 60 years.

The convictions of Mejia and his co-defendants are the latest in a series of federal prosecutions by the United States Attorney’s Office for the Eastern District of New York targeting members of the MS-13, a violent international criminal organization.

The MS-13’s leadership is based in El Salvador and Honduras, but the gang has thousands of members across the United States, comprised primarily of immigrants from Central America. With numerous branches, or cliques, the MS-13 is the largest and most violent street gang on Long Island.  Since 2003, hundreds of MS-13 members, including dozens of clique leaders, have been convicted on federal felony charges in this district.

A majority of those MS-13 members have been convicted on federal racketeering charges for participating in murders, attempted murders, and assaults.  Since 2010 alone, this Office has obtained indictments charging MS-13 members with carrying out more than 30 murders, and has convicted dozens of MS-13 leaders and members in connection with those murders.