According to Italian authorities Giuseppe Coluccio is one of Italy’s most powerful criminals. He is said to be one of the leading members of the ‘Ndrangheta, in charge of very lucrative narcotics smuggling operations. The ‘Ndrangheta has become even more powerful than its brothers in Sicily and Campania, and has an estimated turnover of 36 billion Euros.

Coluccio did not become a criminal. He was born into it. When he was still a young boy, his father already had attained an important position with the ‘Ndrangheta. But before he could teach his son the inner workings of this secret organization, or tell him to stay away from a life of crime, he was murdered during a war between rival ‘Ndrangheta clans. The ‘Ndrangheta is known for its close knit clans, that are often connected by blood. Many clans also forge a bond by allowing their sons and daughters to marry the children of other members. This method causes its members to respect the code of silence, because if they would talk to authorities their families would desert them.

Coluccio had lost his father when he was still in his teens, but he still had other relatives who had become powerful members, bosses even, men like Rocco and Giuseppe Aquino. In his hometown Marina di Gioiosa Jonica, a seaside town on southern Italy's Ionian coast, Coluccio and his clan started extorting fishermen. The money that was made by this extortion scheme was pumped into the drug trade.

During the 1990s, and into the new millennium, Coluccio was making millions by smuggling cocaine from South America to Europe and North America. He had forged close links with the Mexican Gulf Cartel, and the ‘Ndrangheta had managed to establish a monopoly on the smuggling of cocaine into Europe, which earned the clans billions of Euros each year. 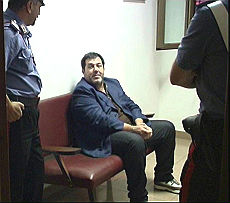 But during the new millennium authorities were hard at work at bringing down Coluccio’s criminal empire. To increase pressure on him after he fled after being convicted of gun, drug, and mafia association charges, he was named one of Italy’s 30 Most Dangerous Fugitives. It didn’t stop him from leading a life filled with luxury. He even managed to flee Italy altogether.

In 2005 Coluccio and his brother settled in Toronto, Canada. The ‘Ndrangheta already had many of its members there, and Coluccio was welcomed with open arms as their new leader. Using false identification papers he was now known as Giuseppe “Joe” Scarfo, or Antonio Bertolotti. He was on the run, but lived a nice life as he resided in a luxury condo at Palace Pier on Toronto's waterfront, and drove in several expensive cars, such as a yellow Ferrari, and a silver Maserati.

In August 2008 Canadian authorities realized they had a very important ‘Ndrangheta boss in their midst, and arrested Coluccio as he left his condo to go to a strip mall. Police found $1.5 million in cash, cheques and jewellery in his apartment. By late August, he was extradited to Italy where he faced international drugs trafficking charges. Currently in his early forties, it is unlikely Coluccio will ever see freedom again. He is serving his prison sentence under the harsh 41bis law. A law which is reserved for the most powerful mob bosses, and is put in place to keep them isolated from their clans.