Two New England mobsters stood before a Boston judge, yesterday, and pleaded not guilty to conspiracy charges. Both men have links dating back to the good ol’ days of the American Mafia, yet as their charges were read one couldn’t help but think of the dismal state the once powerful crime syndicate is in today.

According to the indictment, both men are charged with “conspiracy to interfere with commerce by extortion.” Fancy words for extorting $50,000 in protection payments from a video poker machine company located in Revere for the past seven years.

I think you can make more begging for change on certain street corners. 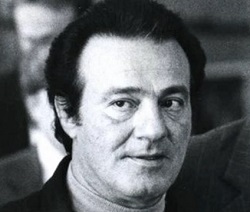 The two alleged masterminds behind this extortion are reputed New England acting boss Anthony “Spucky” Spagnolo (72 - an old photo of him on the right) and made member Pryce “Stretch” Quintina (74). According to the indictment the racket had been going on for decades and both mobsters were only carrying on what must’ve begun to feel like a tradition. The new owner was afraid that if he did not continue to make the protection payments, the Mafia would force him to remove his company’s machines from the bars and social clubs that hosted them and permit other vendors to install their own video poker machines.

So he contacted the feds.

The Boston Globe writes that both men “reputedly represent the old guard of the Patriarca crime family, their service dating back to the Mafia’s glory days, when the late boss Gennaro Angiulo controlled the Boston underworld from the 1960s to the early 1980s.”

Spagnolo was allegedly involved in narcotics and a capo in the New England family, while Quintina’s uncle was also a capo. Furthermore, the Globe writes, “Spagnolo and Quintina have served prison terms themselves. Spagnolo pleaded guilty to numerous racketeering and drug dealing charges in 1991 and was sentenced to nine years. Quintina was sentenced in 1995 to 7½ years. He was charged with setting up Angelo Patrizzi for murder in 1981, though he pleaded guilty to racketeering charges in an agreement with prosecutors.”

As stand up as they come. Especially in Boston.

Irish crime boss and infamous rat James “Whitey” Bulger played a big role in helping the FBI decimate the New England La Cosa Nostra family, his biggest rival for control of the city’s rackets, during the 1980s and 1990s. With turncoats like Bulger, news about a stand up gangster in Boston always comes as a surprise.

Spagnolo and Quintina face 20 years in prison if convicted. Two decades in prison for $7,142.86 a year for seven years.

This ain’t The Godfather. It isn’t even Goodfellas. This resembles the mob family portrayed in Ghost Dog: The Way of the Samurai. An excellent movie starring Forest Whitaker as a black hit man who works for the Italian Mafia. A Mafia that operates out of the back of a Chinese restaurant where its members are hounded by people left and right because they are late with their rent and face eviction.

Why bring up the movies?, you may ask. Well, because movies are the only thing that is keeping the Mafia’s reputation for violence and untold riches alive. Though there remain several powerful crews and families in New York, Chicago, Detroit, New Jersey, and, perhaps, Philadelphia, in most cities the Mafia is but a shell of its former self.

In most places, the Mafia has become like an old boxing champ. Someone who was once feared and powerful, someone whose name still carries weight because of replays of his old fights. But also someone who is now nothing more than an old, fat, mumbling has-been who no longer resembles the man on the television screen.