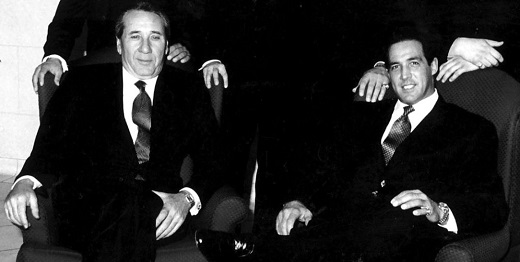 After dominating headlines and best-seller lists for over a decade, Montreal Mafia boss Vito Rizzuto’s (pictured above, left) story is finally coming to television. Bad Blood: The Vito Rizzuto Story is a true crime, six part limited event series based on Business or Blood by authors Peter Edwards and Antonio Nicaso.

“It still doesn’t feel real,” Edwards tells Gangsters Inc. when asked about this huge project. “I can’t turn on the television yet and actually see it, but it’s a great feeling. It feels good to be part of such a great team of producers and writers. We started writing the book and hadn’t finished it yet when a third partner, Tony Cianciotta, helped make that deal. It was his job to try find an outlet to make a movie or television show. It’s so much work putting this together.”

And the work has only just begun. “I’m a consultant for the series so that’s a lot of fun,” Edwards says. With projects like these it’s always about getting the details right. Edwards: “I’ve been talking with one of the writers about a guy I met and what his personality is like.”

Though Edwards never actually got to talk to the secretive Sicilian-Canadian mob boss himself – Rizzuto shunned the press for the most part –  he did meet people around him. Like Joe Di Maulo, who himself was murdered in 2012 as part of Montreal’s increasingly volatile mob war.

The violence is part of what makes Rizzuto’s story so interesting – as it is with most crime stories - but there’s more. “It’s Shakespearian,” Edwards explains. “It’s about the real choice between survival for the family or revenge for the ones lost. It is an odd situation where you can easily put yourself in that position. What to do if you’re in prison and you hear they murdered your dad, your oldest son [as happened to Vito Rizzuto], what’s your responsibility to the living and the dead?”

Another part of this story is about power and money, Edwards says. “It shows huge money and huge power, but I wouldn’t want to be him,” the journalist tells us. “There’s an emptiness.”

“This show will not glorify the Mafia,” he emphasizes. “These are not perfect human beings. Everyone is flawed and these people, characters, have their flaws too. These are humans. They didn’t exist in a vacuum, hanging around in strip clubs all day. They were propped up by other people, developers, city hall politicians, they are a byproduct of main stream society.”

Since news of the television show got around, many people have contacted Edwards about a possible role, he says. “It’s curious, but several people from that world wanted to talk about casting.” Whether they will score a part is not up to Edwards, however. “The producers and casting directors will choose the best people for the show.”

Bad Blood: The Vito Rizzuto Story is scheduled for one season with six episodes. Will they stick to just the one season? “It depends on the response,” Edwards says. “There are a lot of directions it can go in really.”