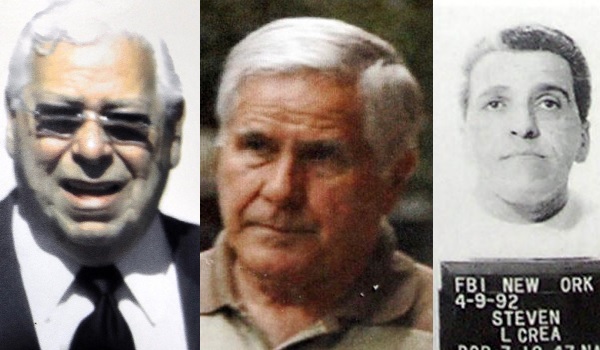 The year is 2017 and it is business as usual for the Lucchese crime family, one of New York’s infamous five Mafia families. While many thought the American mob had lost its teeth – gangland murders had become a rarity – prosecutors say that the Lucchese family proved them wrong in 2013 with one cold-blooded slaying reminiscent of the mob’s glory days and plenty of other violent deeds, including two shootings of Bonanno family gangsters, one because he had insulted Lucchese boss Steven Crea.

Yesterday, agents of the FBI and officers of the NYPD arrested 19 members and associates of the Lucchese crime family and charged them with murder, attempted murder, assault, drug distribution, loansharking, illegal gambling, mail and wire fraud, and selling untaxed cigarettes.

Headlining the indictment is the family’s hierarchy consisting of alleged acting boss Matthew Madonna, underboss Steven Crea, and consigliere Joseph DiNapoli. Madonna is considered “acting” or “street boss” because the Mafia (and authorities) still views Vittorio Amuso, serving a life prison sentence, as the titular head of the Luccheses.

Under the leadership of these men, the Lucchese crime family operated not like it was 2017, but as if it was still 1967 and La Cosa Nostra was the biggest player in town.

In those years long since passed, boss Matthew Madonna was one of the city’s biggest dope peddlers. Back then, he provided notorious Harlem drug kingpin Leroy “Nicky” Barnes with heroin. The two had met in prison and became good friends and business partners. They also became very rich.

But the fast life came to a screeching halt when the whole drug ring was busted and Madonna received a 30-year sentence for drug trafficking in the mid-seventies. Upon his release from prison in the 1990s, Madonna began his rise in the Lucchese family, becoming part of a ruling panel overseeing the organization’s operations by the mid- to late-2000s.

Led by a man with a history in the drug business, it is no surprise to see the indictment that was revealed yesterday contain serious drug charges. Prosecutors allege the Luccheses trafficked in cocaine, heroin, prescription drugs such as oxycodone, and marijuana. Lucchese family soldier Joseph Datello (66) and associate Carmine Garcia (65) also conspired to import cocaine from South America, the indictment reads.

The two men, together with Lucchese family captains John Castelucci (57) and Tindaro Corso (56), and associate Richard O’Connor (63), also dealt in contraband cigarettes – a scheme where they profited from the purchase of “cigarettes that did not bear the stamp evincing payment of applicable cigarette taxes.”

Though 81-year-old Madonna is now labeled as the Lucchese family’s supreme leader, for a long time, authorities pointed their finger at 69-year-old Steven Crea. When Lucchese bosses Vittorio Amuso and Anthony Casso went on the lam in the early 1990s, Crea was one of several men tasked with running the family. After doing time in prison on a labor racketeering conviction, he was back on the streets in 2006 and considered the family’s acting boss.

Now, however, prosecutors say he is the family’s underboss. His son, 45-year-old Steven Junior, allegedly followed in his father’s footsteps and is labeled as a captain in the crime family.

The father and son worked together, prosecutors allege, while planning the demise of feared Purple Gang hitman Michael Meldish. The Purple Gang was a New York street gang filled with killers and drug traffickers, many of whom would go on to become high-ranking Mafiosi.

With such old connections, Meldish had a lot of dirt on several dangerous individuals. According to the indictment, in November of 2013, Madonna, Crea Sr. and Jr. gave orders to 43-year-old Christopher Londonio and 59-year-old Terrence Caldwell to “whack” the 62-year-old Purple Gang inductee.

On November 15, a woman, driving with her daughter, on Ellsworth Avenue in the Bronx saw a Lincoln parked with its driver’s door open and a man’s leg hanging out. When they went to investigate what they thought would be a possible stroke or heart attack, the two women discovered the gruesome scene of a gangland execution. Meldish was bleeding from both his ears, as he lay dead from a gunshot to the head.

Only it wasn’t. It was 2013 and the mob had not committed such brazen acts of murder in the streets for several years. Murders connected to the American Mafia can be counted on one hand – If they can be counted at all.

The hit on Meldish, however, was different. It was also part of an escalating pattern of violence handed out by the Lucchese family. Several months earlier, then-47-year-old Bonanno family mobster Enzo “The Baker” Stango was shot and wounded by Caldwell as he sat in his SUV making a phone call.

Stango wasn't the only Bonanno mobster targeted by the Luccheses. In late 2012, 38-year-old Paul Cassano and 33-year-old Vincent Bruno, acting at the direction of father and son Crea, attempted to murder a Bonanno family associate who had shown disrespect toward Crea Senior.

It seems that Crea had quite a taste for blood, not unlike his predecessors. According to the indictment, in October of 2016, he also ordered Joseph Datello to go to New Hampshire and murder a man who cooperated with law enforcement.

Whacking a rat? Now that’s old school! That is going back in time, back to the sixties. Only, again, the sixties are long gone. So is J. Edgar Hoover. Today, we live in 2017. Today, the FBI is run by competent agents intent on taking down the Mafia and anyone deemed a threat to society. Agents that have a wide variety of tools at their disposal, including the Racketeer Influenced and Corrupt Organizations Act, better known as RICO.

Madonna, Crea, and 81-year-old DiNapoli, another old-timer, know this. Yet, for some reason they decided to ignore it and run their organization as if it was 1967 and La Cosa Nostra ruled the underworld and parts of the world above, leaving a trail of blood in their path.