Part 2 of The Madman of the Mafia 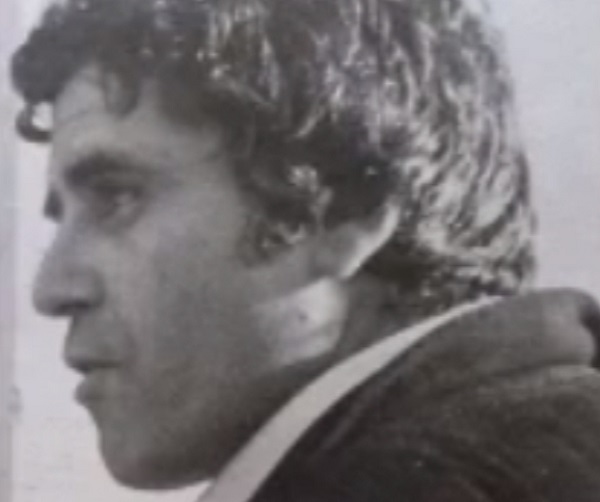 Part 2 of The Madman of the Mafia. Read part 1 here.

The shrinks could agree to disagree but inevitably favored madness over conscience. They claim Vitale is mentally semi-infirm on one hand, but his memory was okay and therefore, his confession valid.

The doctors were in a Catch-22 situation. They had to assume that a Mafioso who speaks is crazy, so if he is, he is unreliable. Or is he? Maybe the old joke about the paranoid knowing all the facts is true after all.

Seven months later, Vitale is transferred to a criminal insane asylum at Barcellona Pozzo di Gotto, near Messina in eastern Sicily. Over the years ahead, he would move from here to other asylums like Gratteri in the Madonie Mountains, and to Ucciardone Prison in Palermo City.

For three months, between May and July in 1977, along with the people he had exposed, he went on trial in Palermo. The big one who was missing was uncle “Tatti.” Granted bail and appealing his arrest, he disappeared in 1974.

The cosca is taken under the control of Rosario Riccobono, head of Mondello, and will never again be controlled by Vitale’s biological family.

Like so many of the early Mafia maxi-trials, it became grounded and then swamped by legal obfuscation, and dragged into the endless quicksand of appeals. In Palermo, it is called gustatory-adjusted. In most other places, they call it a fix.

Eventually, the only two sentences handed down were against Giovanni Battista Vitale, gone forever, somewhere, and Leonardo. 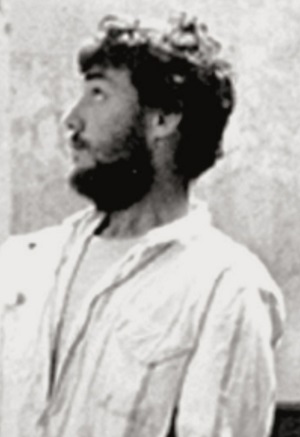 There is a photograph of him in court, as he stands and gestures at the judges. He appears as almost a religious figure. Jesus-like in his appearance, a man facing his calvary (right).

Sentenced to 24 years on July 14, most of his imprisonment will be spent in psychiatric wings where he will be subjected to electric-shock treatment and where he abuses himself frequently, trying through self-harm to somehow cleanse whatever demons were scratching at him.

Like the Florentine poet, Dante, perhaps Vitale felt, “....upon the journey of my life, I found myself within forest dark, for the straightforward pathway had been lost.”

From the night he walked into the police station, over the next eleven years, Vitale shuttles between prisons and insane asylums. He would face a via dolorosa that would lead him, endlessly, through the rest of his life. Tormented by guilt, under threat every minute from the reach and power of the Mafia, besieged by a distraught and confused family, his madness would grow in direct proportion to every truth he would tell his wardens.

In fact, at this stage, the Mafia did not want him dead, as this would have endorsed his evidence and accusations. They want him mad. And, they succeed.

He is unusual among the hundreds of Sicilian Mafiosi who repented in that he did not inform for gain, or to protect anyone, or to guarantee his safety. His act of confession was driven by a moral compunction which triggered his urge to surrender to the authorities.

His final judicial home is in Reggio Emilia, near Bologna, northern Italy, where he spends the last two years of his sentence, praying to enter the grace of God and repent his sins.

Tomasso Buscetta, the great Mafia penitent, comes in from the cold in June 1984, the same month that Vitale is released from prison and sent home to Altarello di Baida. 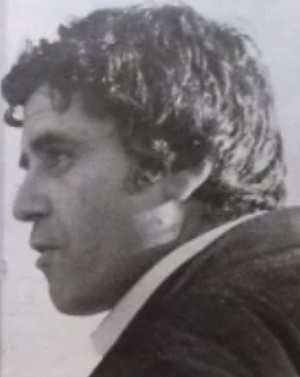 Buscetta, who will be called “A general in a ghost army,” by famous Sicilian author Pino Arlacchi, will turn the Mafia upside down. The way Vitale should have done, given a chance.(6) This new informant will confirm, in due course, almost everything Vitale had confessed, including the guilt of all the Mafiosi arrested, tried, and acquitted in 1977.

Leonardo’s (right) winter solstice is beginning in the heart of summer. Cosa Nostra is now a different animal. More of a monster than a beast and the Corleonesi are the ringmasters.

Riina waited and watched. A saturnine and malevolent Mafioso, he had an army of killers and a bureaucracy of fixers to do his bidding. He has become the dictator of Cosa Nostra. And he never forgets anything.(7)

Through the months of his freedom, Leonardo wanders the streets, attends church almost on a daily basis, and decides he wishes to joint the Franciscan Order and devote the rest of his life to God.

He must have known however they would come for him one day. And they did.

The Coreleonesi, the cosche that united under Riina by the early 1980s, formed a parallel Mafia in Sicily. They were like hyenas, eating everything in their path. There was no shortage of killers among their ranks.

On Sunday, December 2, Vitale attended Mass with his mother, Rosalia and, sister Maria. She drove them in her little blue, knock-around old Fiat 500, west and south, through Piano dei Geli up through the scented pine woods, and hills,16 kilometers, to San Martino delle Scale to pray at the Basilica, an ancient church founded in the 6th Century.(8)

They returned home to Via Vicolo Siccheria in Altarello. Rosalia was in the front passenger seat, and Leonardo had curled his length into the cramped rear seats. 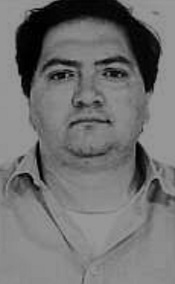 Maria parked in front of their house and went to unlock the iron-plated gates in front of their modest home. It sat dwarfed in the shadows of the high-rise apartments that were now part of the Palermo landscape blight.

She stopped at the sound of a high-revving engine, turning to see that a red motorcycle had pulled up near the car.

The passenger, who was Domenico Ganci (right), jumped off the bike and started shooting at the car with a handgun. It was a .38 caliber revolver. The first shot blew a hole in the rear window, then the rear near-side back widow exploded, and there was blood everywhere, and Vitale was hit twice in the head. Miraculously, his mother escaped unharmed. Ganci jumped back onto the bike, driven by Domenico Guglielmini, and it roared off into history.

As Leonardo lies sprawled in the car, blood everywhere, he is only a few hundred meters from where he had murdered Vincenzo Mannino half a life-time ago.

The police and ambulance come, and Leonardo is taken to the Civic Hospital, ten minutes away, where he will die on Friday, December 7, from his wounds. The killers are from the Mafia family of Noce, under Raffaele Ganci, the man who was always in Salvatore Riina’s heart. 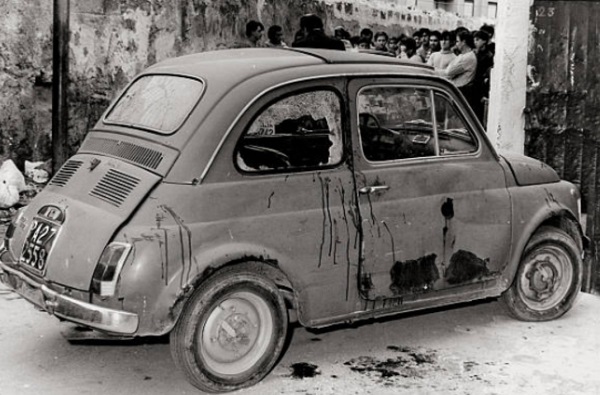 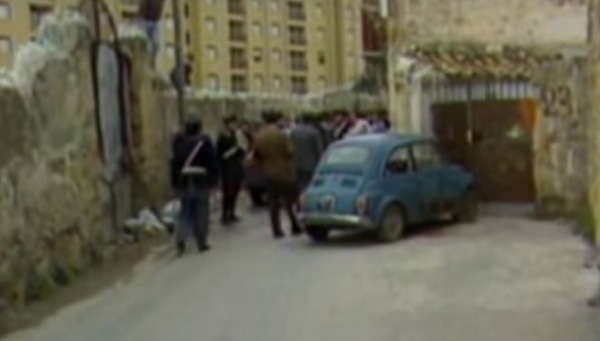 Leonardo Vitale and his confessional highlighted the state’s endless unwillingness and ineffectiveness in admitting to, and handling, the Sicilian Mafia; not just as a problem for the government, but something that fractured and dislocated the whole country for over a hundred years.

In its closets of shame, the Roman Senate has stored secrets of the Mafia, filling the spaces alongside  the hundreds of thousands of court documents that tell a never-ending story of how long it has been in this endless war.

Leonardo’s original written testimony was used in the Palermo Maxi Trial, 1986-1987, three years after his murder, where judge Giovanni Falcone declared that "it is to be hoped that at least after his death Vitale will get the credence he deserved."

According to Falcone, the Mafia understood the importance of Vitale's revelations much better than the Italian justice system at the time and killed him when the moment was most opportune.

If there is one thing that the narrative of Leonardo Vitale can teach us it is that to err is human, to be in the Mafia is not that much fun.

(1) Each main police station in Italy’s 105 provincial capitals has a Squadro Mobile, a flying squad. Today, in Rome, Milan, Naples, and Palermo, each squad is divided into nine sections covering organized crime through to crimes against public administration.

(2) Mafia association. Italy's penal code introduced the crime of “mafia association” in 1982. It is applied when a suspect makes use of a) group intimidation, b) subjugation of victims and c) a code of silence in order to gain control of business activities or to influence public voting. The code also allows for the confiscation of mafia assets. Since 1996, confiscated mafia assets have also been allowed to be part of civil society organizations.

(3) In the 19th Century, the alleged boss of bosses of Palermo’s Mafia cosche, Francesco Siino, was an informant, according to the report of 1898 by Chief of Police, Armando Sangiorgi. Contrary to popular belief, the word pentiti was in use as early as 1938, following the confession of Salvatore Cracolici, boss of the Tommaso Natale Mafia cosca.

(4) In a Mafia trial held in Palermo in April, 1930, for criminal conspiracy, the Altarello cosca was represented by Francesco Paolo Vitale, son of Giovanni Battista Vitale, and Leonardo son of Francesco Paolo Vitale, and Giovanni Battista son of Filippo Vitale and numerous other related mafiosi, indicating the depth of biological family connections. Grandfather, fathers, sons, uncles, nephews and cousins all played their part in the group’s formation.

(6) Tomasso Buscetta was the first major Mafia figure to pierce the veil of secrecy shrouding the inner workings of Cosa Nostra. Unlike Vitale, eleven years earlier, who had limited knowledge, Buscetta,s horizons were almost endless. He provided Judge Giovanni Falcone with enough evidence to help create the great Maxi-Trial of the late 1980s, the biggest criminal trial in Sicilian history. In an interview with a French journalist, Judge Falcone said:

“Before him we had only a superficial idea of the Mafia phenomenon. With him we began to see inside the organisation. He gave us a lot of information about the structure, the recruitment techniques and the functions of Cosa Nostra. Above all he gave us a broad, global, wide-ranging vision of the phenomenon. He provided us with an essential interpretative key, a language, a code."

He also confirmed everything Vitale had said all those years before.

(7) See my story In Search of the Corleonesi for more information.

(8) Some sources claim the family attended Mass that Sunday morning at Santa Maria della Pace, the famous Church near Via Cipressi which lies about half a kilometer east of their home.

It was at this church, that Leonardo Vitale reached out for religious guidance, from the Capuchin monks.

Almost all sourced references confirm that Vitale carried out two murders and was involved in a third which was a kidnapping gone wrong. However, according to the testimony of Doctors Nestore Pedone and Domenico Signorino given before a Parliamentary Commission on the Mafia from September to December, 1974, they claim he admitted to five murders and five attempted murders between 1960 and 1972.