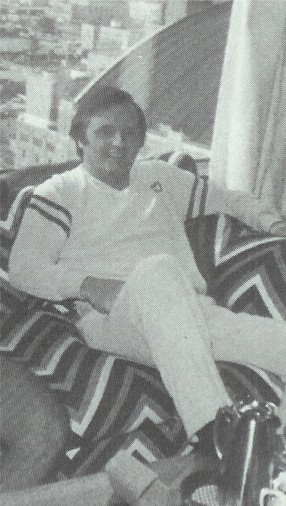 Tommy DelGiorno started out running a small bookmaking and numbers business during nights and weekends while also having a legit day job as a truck driver in the early 1960s. Tommy Del himself liked to gamble as well. He visited several mob run card and dice games. This is how he hooked up with the Philly mob. After slowly expanding his business Tommy Del came to the point where he needed a big partner where he could edge off some of his bets.

He was introduced to Broadway Eddie Colcher who worked for big time bookie and Bruno associate Frankie Flowers D’Alfonso. First he edged of some of his bets to Colcher and D’Alfonso but eventually he became partners with them. DelGiorno eventually rose in importance, outranking Eddie Colcher. DelGiorno and D’Alfonso became partners in a restaurant which they bought from the Piccolo brothers (who were made members of the Philadelphia Family.) The restaurant was called Piccolo’s 500 and had been a mob hang out, that would not change, what did change was the name. DelGiorno and D’Alfonso hired notable Philadelphia chef Vincent “Cous” Pilla, and to lure him to work at their restaurant they changed the name from Piccolo’s 500 to Cous’ Little Italy.

It was at DelGiorno’s restaurant that Philadelphia’s mob boss Angelo Bruno had his last dinner. He was brought home by mob associate John Stanfa and when he arrived there a gunman shot him in the head with a twelve gauge shotgun. Bruno was dead on the spot and Stanfa fled (he would emerge as boss in the early 1990s.) At this point DelGiorno was an associate and desperately wanted to become a made member of the organization. In order to become a member he had to participate in a murder.

After the murder of Angelo Bruno several more murders of high ranking Philadelphia mobsters followed, among them Anthony Caponigro and the new boss Phil Testa. Eventually Nicodemo “Little Nicky” Scarfo became the new boss. It was under Scarfo’s rule that DelGiorno was ordered to commit his first murder. The victim was John Calabrese, who had the nerve to set up his own independent loansharking operation out of several pawnshops in Atlantic City. Atlantic City was considered Nicky Scarfo’s territory, his home turf. But Calabrese didn’t just refuse to send money from his loansharking business, he refused to pay Scarfo anything at all. Calabrese had to be made an example of.

On October 6, 1981 the Calabrese hit went down. Calabrese showed up unannounced at Cous’ Little Italy and as Chickie Ciancaglini lured him outside to a spot in front of an alley DelGiorno and Faffy Iannarella snuck up behind him and shot him. Scarfo sent word to both men that “it was great!”

Another man who had to be made an example of was Frank “Frankie Flowers” D’Alfonso. He too refused to pay tribute to Scarfo. He however was not killed. In 1981 Scarfo ordered Salvatore Testa and Gino Milano to beat up D’Alfonso. D’Alfonso was hit with a steel rod and a baseball bat, his injuries consisted of a fractured skull, a broken jaw, bones under both his eye sockets had been shattered along with his left kneecap, two bones in his lower left leg were broken, he had a gaping head wound that took 64 stitches to close. Asked by police what had happened D’Alfonso said: “I got hit by a truck.” Several years would pass in which this stand up guy continued to refuse paying Scarfo his tribute, Scarfo this time was seriously fed up. On July 23, 1985 D’Alfonso left his house to buy a pack of cigarettes. Two men walked up behind him and fired five shots in his back and head, Frankie Flowers a true stand up guy was dead. He knew he didn’t stand a chance against Scarfo, he knew he would be killed, but refused to run to the law. The man supervising his murder was Tommy DelGiorno.

DelGiorno was one of the supervisors of the hit on Salvie Testa. Testa had become a threat to Scarfo and as a result had to go. Testa was a difficult target though, he sensed Scarfo’s men were out to get him. Eventually DelGiorno told Scarfo of his plan to pressure a member of Testa’s inner circle to betray him. It worked, on orders of Scarfo DelGiorno told Joey Pungitore that Scarfo wanted Testa dead and that if he did not help them Scarfo would kill him, his father and his two brothers. A shocked Pungitore eventually said okay but requested that he would not have to kill Testa himself. On September 14, 1984 Testa was killed. The man who participated in his killing reaped the benefits, Tommy DelGiorno was promoted to capo.

By the summer of 1986 things began to look bad for Tommy Del. Two major money making deals went bad and Scarfo blamed him. The New Jersey State Police had Delgiorno’s Ocean City condo bugged and his phone wiretapped. Several mob soldiers were complaining to Scarfo and underboss Philip Leonetti about DelGiorno. On November 2, 1986 two New Jersey State Police detectives visited DelGiorno. They told him they were there to talk about a plot to kill him. They had two tapes they would like him to hear, one contained DelGiorno’s own voice, the other was a conversation between Faffy Iannarella and Sal Grande. Two days later DelGiorno flipped, the first Philadelphia made guy to do so.

DelGiorno’s testimony helped put 53 Philadelphia mobsters and associates in prison and his decision to turn government witness caused a flood of other Philly Family turncoats, among them underboss Philip Leonetti. DelGiorno was eventually sentenced to five years in prison and vanished into the witness protection program.

While testifying DelGiorno said the following about Frankie Flowers D’Alfonso:
“Are you familiar with an individual named Frank D’Alfonso?”
“Yes, I am.” DelGiorno replied.
“And what is his nickname?”
“Frankie Flowers.”
“And who did you know him to be?”
“He was just a guy hanging around the neighbourhood, pretending he was a gangster.”

In the end it turned out Tommy Del was the one pretending.