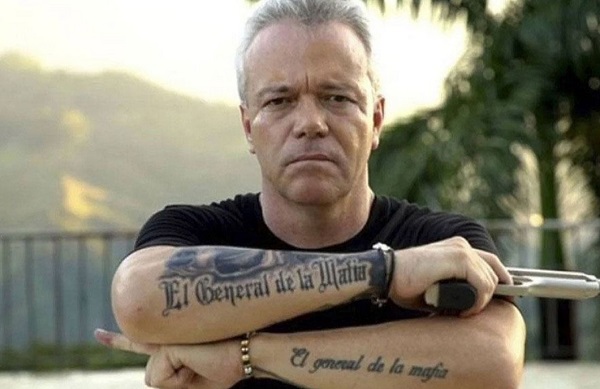 Jhon Jairo Velásquez, who was once one of Colombian drug lord Pablo Escobar’s chief sicarios, died yesterday. Velásquez, also known by his nickname “Popeye”, had been hospitalized on December 31 and passed away at the National Institute of Cancer in Bogotá, Colombia. He was 57.

When Pablo Escobar’s Medellin Cartel was at the height of its power, during the 1980s, Velásquez was tasked with doling out death and destruction in the name of his “patron”. He went above and beyond the call of duty. He confessed he himself killed around 250 people, while admitting his involvement in at least 3,000 other killings while he headed a network of hitmen.

Among his victims are influential people like Andres Pastrana Arango, who would later become President of the Republic and Francisco Santos, who would go on to become vice president - both men were kidnapped by “Popeye” and his crew, while presidential candidate Luis Carlos Galán Sarmiento was assassinated.

In 1992, authorities busted Velásquez for drug trafficking and sentenced him to 52 years in prison. He was released in 2014 and became a media darling – appearing anywhere from news shows to documentaries – always eager to tell his violent story.

Hanging with the new Escobar

But he didn’t just talk about these things. He went straight back to doing what he had done before, prosecutors alleged. He became a target of the Colombian Attorney General's Office “after he repeatedly threatened Colombian presidential candidate Gustavo Petro and his followers,” CNN reports.

“And in December 2017, authorities found Velásquez at a luxurious birthday party of drug trafficker Juan Carlos Mesa Vallejo, also known as ‘Tom.’ Vallejo had been a drug trafficker for 30 years, and had accumulated a fortune almost as large as Pablo Escobar's. The Prosecutor's Office said Velásquez revoked his probation. Velásquez said otherwise.”

To proclaim his innocence, Velásquez took to Twitter, writing: “It was a birthday party. In a hotel. I was at that hotel. In the wrong place. It's not a crime to go to a party. That's why they released me.”

But not for long. In May of 2018, he was charged with extortion. Authorities claim he was extorting individuals who had worked as front men for Pablo Escobar and had accumulated considerable assets as a result.

“He was trying to recover property [and] money that he left years ago in the hands of narcos, and that very likely was inherited or received by their relatives, who are the ones who have been pressing and are the ones who denounced him,” a source said about the charges.

A man responsible for the horrific death of thousands has died. Some tears will be shed, but they will be overruled by the many cheers from people who felt justice came up short when it tried to punish this infamous Sicario.