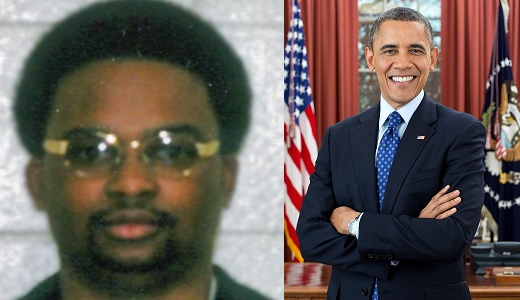 Eric “Fat Eric” Wilson, a former leader in the Gangster Disciples, was given a sentence reduction by President Barack Obama on Tuesday. Wilson (photo above, left) was serving a life sentence for drug trafficking, but that has been reduced to 35 years, which means he’ll be eligible for release in 7 years.

The former gang boss can thank U.S. Rep. Bobby Rush for sending a letter to Obama in which he wrote that Wilson deserved a break in his sentence because of his “extraordinary rehabilitative efforts,” the Chicago Sun Times reported. “Wilson earned a 4.0 grade average in college in prison while working in the prison steel factory as a skilled welder,” Rush wrote, adding that he did not believe Wilson would’ve gotten the same life sentence had he been subjected to current laws.

As a “governor” in the Gangster Disciples organization, Wilson reported directly to supreme leader Larry Hoover and himself ruled over large areas of Chicago, commanding hundreds of gang members. In the late 1990s, Hoover, Wilson, and several others were busted and convicted of participating in a drug conspiracy. In 1998, Wilson was sentenced to life behind bars.

Not far from Chicago, in Rockford, a leader of the Black Gangster Disciples also received a sentence reduction. Karl Fort’s life sentence was reduced to 35 years as well. He’ll be out in 2019. Though no one can predict how both these men will behave once outside, they might play a role in the community, telling kids to stay away from the gang life and perhaps mediating between various groups currently at war with each other.