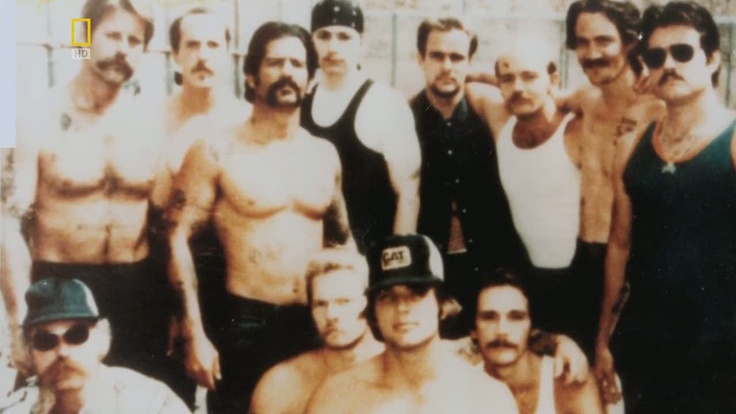 To survive in prison one has to be ruthless. Especially when one is severely outnumbered in a sea filled with thousands of sharks. The founders of the Aryan Brotherhood understood this when they formed their prison gang somewhere around 1964 in California’s San Quentin State Prison.

Established as a way to protect white convicts from black and Latino inmates, the Aryan Brotherhood quickly made a name for itself as a vicious and violent organization hell-bent on taking its place among the top of the prison food chain.

Known as The Brand and AB, its members are recognizable by a large variety of distinctive tattoos, many referring to white supremacy. Tats usually include the words “Aryan Brotherhood,” “AB,” Nazi symbolism such as SS, sig runes, swastikas, and numbers referring to Heil Hitler, as well as shamrocks and Celtic iconography.

If members of the Aryan Brotherhood come across a non-member displaying any of these tattoos, he must cover them up or suffer the consequences, a turncoat member of the AB once told reporters of National Geographic.

Surrounded by countless black and Hispanic gangs, the Aryan Brotherhood has gone the extra mile to instill fear in its enemies and authorities by committing gruesome acts of violence behind bars, including the murders of several guards.

Though they are known as a white supremacy gang, they have close ties to La Eme, the Mexican Mafia, and are known to do business with any group if it brings in cash. In the quest for power and survival there is no place for racism.

In the past decades, we saw the emergence of several other white prison gangs, such as Aryan Nations, Nazi Low Riders, Dirty White Boys, and the United Aryan Brotherhood. However, despite the competition all regard the Aryan Brotherhood as the main force in America’s prison system.

For more on the Aryan Brotherhood and other White Supremacy gangs, see: