Prison island for drug convicts to be guarded by crocodiles 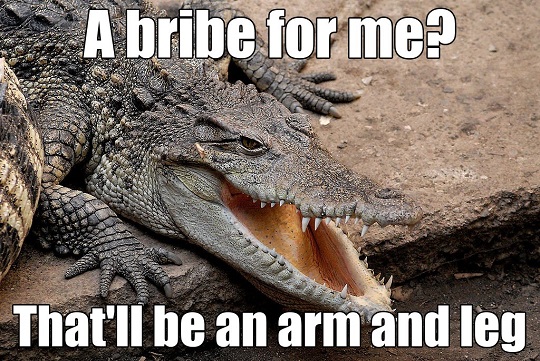 The primary goal of every prison on earth is to keep its inmates locked up. Prison breaks are bad for business and blemish the reputation of authorities. Yet, with many criminals making copious amounts of cash bribery has become rampant. As more guards are being corrupted, Indonesia’s anti-drug agency has proposed building a prison on an island guarded by crocodiles. Because you can’t bribe a crocodile.

The proposal, AFP reports, is the pet project of Indonesia’s anti-drug chief Budi Waseso. “We will place as many crocodiles as we can there. I will search for the most ferocious type of crocodile,” he told local news website Tempo. The anti-drug boss said that crocodiles would be better at preventing drug traffickers from escaping prison as they could not be bribed.

At least, not with money. But I’m certain they, too, would love a hot chick. Exactly how this would work has not been made clear yet. Authorities claim the plan is still in the early stages, with no location or opening date yet determined, AFP reports.

Indonesia is known for its severe anti-drug laws, which include death by firing squad, and inhumane and overcrowded prisons. Despite its tough laws, drugs continue to be used and trafficked within the Asian archipelago comprised of thousands of islands with an estimated population of over 255 million people. Corruption of prison guards is a regular occurrence with many of them being charged with narcotics offences.

If and when crocodiles will take on the role of prison guard, it remains to be seen how they will fare. As the saying goes, “Where there’s a will, there is a way.” Though caught and convicted these drug traffickers are not dumb. They have made a living trying to outsmart authorities, crocodiles, fearless and vicious as they may be, could be easily manipulated.

Especially if a Steve Irwin-type inmate comes along.