If you thought Michael Spinelli’s nickname was bad, wait until you’ve heard the story of how he became a made member of the Lucchese crime family. As far as gangland stories go, Spinelli’s is anything but Hollywood material. Yet, it’s a perfect illustration of the demise of the American Mafia.

Spinelli hung around the Lucchese crime family back when this family was going through some tough changes. Their capable leader “Tony Ducks” Corallo was spending the rest of his life in prison after being convicted in the famous Commission Trial and the family had come under control of boss Vittorio Amuso and his trusted second-in-command Anthony Casso. 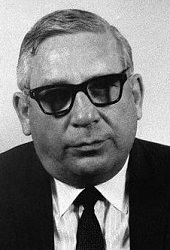 Amuso and Casso were total opposites of the calm and smart Corallo (right). Instead of using their brains for the long scam, they used violence for shorter and smaller scams. With these two men at the helm, the family spiraled out of control and into a vicious circle of bloody murder.

Spinelli was all too eager to join in.

As one made man after another ended up dead at the hands – or orders - of Amuso and Casso, paranoia was at an all-time high for men on both sides. Lucchese wiseguys feared for their lives, while Amuso and Casso feared one, or two… or three… or… well, you get the picture, of their underlings might turn snitch and send them to prison for life. So, better safe than sorry, they thought, as they ordered scores of their men whacked.

Thanks to the erratic and deadly actions of their bosses, many Lucchese mobsters did indeed decide to become turncoats. Men like “Fat Pete” Chiodo, who knew a lot about the Lucchese duo’s murderous streak. As Chiodo sat down with his new friends in the FBI, Amuso and Casso began plotting ways to silence him.

But Chiodo was now protected by authorities and the mob was unable to get to him.

Usually, that’s where the plotting would stop. The American Mafia always adhered to the code that it would never harm any innocent relatives of its members and associates. Amuso and Casso, however, disagreed. They ordered their men to murder Chiodo’s sister Patricia Capozzalo, a mother of three who had zero involvement in organized crime, in an attempt to shut Chiodo’s mouth.

Spinelli (right) was tasked with driving the van transporting the shooter. He must’ve been elated that he had been entrusted with such an important role. Even more so when Capozzalo was shot in the neck and back in front of her home in 1992 after dropping two of her children off at school. While she lay bleeding from her wounds, the hit team sped off, celebrating what they thought was a successful hit.

It wasn’t. Not just because Capozzalo survived, but also because it broke a sacred rule within the Mafia’s code of conduct. From this moment on, no one was safe from the mob’s killers. Everyone was fair game.

Spinelli could care less. He had made his bones by participating in a mob hit. Still just an associate, he felt he had now earned his button, the right to become an initiated member of the Lucchese crime family. Unfortunately for him, the bosses had other more pressing matters to deal with and his making ceremony was put off and off. At one point, several months after the hit, in December of 1992, Spinelli found himself locked up in prison, still not made. He complained about his current status as an “unmade” man to Lucchese soldier Frank Gioia Jr. and asked him to talk to Anthony Casso (right) about his situation. Gioia passed on his message to capo George Zappola who passed word to Casso.

As more time went by, Spinelli seemed more worried about his position in the Lucchese family than the time he was and would be spending in a cell. If that was indeed the case then he must’ve been extremely happy when he saw his mob leader walk into the Manhattan Correctional Center.

He and Casso now shared the same prison.

Casso agreed Spinelli should become a made man. Shortly thereafter in January of 1993, the two men met again in a bathroom on the eleventh floor of the Manhattan Correctional Center. They were joined by Lucchese capo Anthony “Bowat” Baratta.

Surrounded by the smell of urine and shit and accompanied by mob underboss “Gaspipe” Casso and captain “Bowat” Baratta (left), Spinelli took the sacred Mafia vows. Of course, this was not the usual induction ceremony. While two high-ranking Lucchese mobsters attended, Spinelli’s official sponsor into the Mafia, capo Richard Pagliarulo, did not as he was housed in a different cellblock.

Aside from the company and surroundings, they also had to improvise when it came to the props used during the mob ceremony. There were no gun and knife symbolizing the tools of the trade and the dangers of the violent life that lay ahead.

Nor did the mobsters have a picture of a saint which would be held by the inductee as it burned, while he recited aloud that if he ever betrayed the Mafia he would burn just like the saint. Instead of the picture, they used toilet paper. Spinelli held burning toilet paper as he swore allegiance to Cosa Nostra, this thing of ours.

It was the most pathetic ceremony in the entire history of the American mob and befitting of the men present and the man being made. And though Lucchese gangsters accepted Spinelli into their ranks as a fellow made man, many jailed mobsters from other families refused to respect him as such for a very long time.

Luckily for Spinelli he has plenty of time as he will remain locked up until 2027. A very long time still to show what a standup guy he is. And if he doesn’t, may he burn like a piece of toilet paper.

Of course, whether he does his time or not, being part of the mob hit team that shot an innocent woman is not the behavior usually attributed to a standup guy, a man’s man. The mob usually steered clear of guys like that. Until they ordered guys to do exactly those things. And then proceeded to make guys like that a part of their brotherhood.

While the coronavirus is causing hundreds of thousands of deaths and sorrow around the globe, it has given Spinelli a huge present. On May 5, 2020, he was released from prison, years before his scheduled release. At 66, he was at risk of getting COVID-19 and experiencing life-threatening health issues. So, he was set free. He claims that he has said farewel to his Mafia life and looks forward to leading a law-abiding life.