A motorcycle club named “Peckerwoods” conjures up certain images. The Peckerwoods Outlaw Motorcycle Club does not disappoint. Racism, neo-Nazi memorabilia, and meth: the entire picture is complete. On Monday, its former president was sentenced to 15 years for drug trafficking. 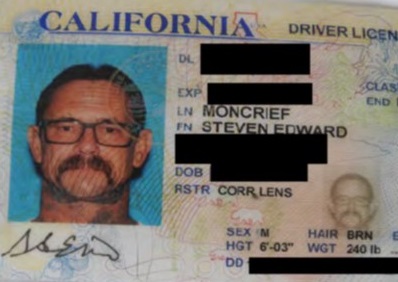 Steven Edwards Moncrief, a Temecula resident, is the former president of the Riverside chapter of the Peckerwoods Motorcycle Club. He was sentenced to 15 years behind bars for participating in a conspiracy to distribute methamphetamine.

Moncrief pleaded guilty in October of 2020. According to search warrants executed in this case, starting in December 2017, the FBI, working in conjunction with the San Diego County Sheriff's Department, started an operation to investigate methamphetamine distribution by multiple individuals in the San Diego area. The investigation included the use of court-authorized intercepts on cellular phones used by participants in the methamphetamine distribution conspiracy.

In his plea agreement, Moncrief admitted that, beginning in 2018, he conspired with others to distribute methamphetamine to individuals within the Southern District of California and beyond. Specifically, Moncrief obtained methamphetamine from other co-conspirators and sold it for a profit.

According to the government’s sentencing memorandum, Moncrief displayed symbols of hate on his clothing, motorcycle and in his home, including banners and stickers that said “Support Your Local White Boy” and “White Pride Worldwide,” and patches featuring Nazi SS Bolts - sentiments that are shared by the club.

The Peckerwoods Motorcycle Club was founded in early 2005 in East San Diego County and has chapters in California, Arizona, and Nevada. The organization of the Peckerwoods Motorcycle Club is similar to larger motorcycle clubs, including the Hells Angels MC and Mongols MC. Their structure consists of a president, vice president, sergeant at arms, secretary, treasurer, road captain, prospects, and hang-arounds.

The Peckerwoods Motorcycle Club were awarded or “blessed” with their diamond patch by the Hells Angles. This patch signals their membership in the 1% better known as the true outlaws within the motorcycle club community.

Peckerwoods Motorcycle Club members have been convicted of multiple crimes including drug and weapons trafficking, possession of stolen property, and assault. Their current club president has pleaded guilty to a racially motivated assault that left an African-American man paralyzed. Members often display symbols of hate on their vests, or “cuts,” including Nazi SS Bolts and Swastikas.