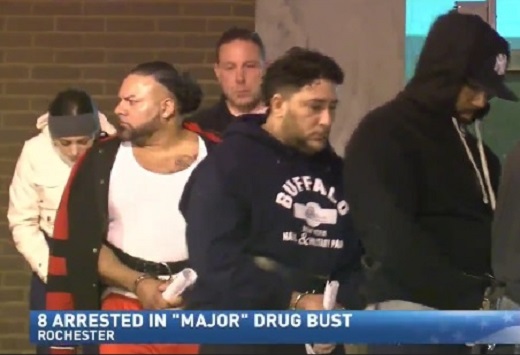 Rochester drug boss Carlos Javier Figueroa ran an organization that trafficked countless kilograms of cocaine into the city by way of Puerto Rico. Those who stood in the way of his burgeoning criminal empire were threatened with a violent death, but one opted to go to the cops instead.

The friendly neighborhood mailman just isn’t what he used to be. Since September of last year, the United States Postal Service (USPS) brought in at least 23 packages filled with cocaine into the United States. Of course, at first the USPS had no clue about this pipeline. Figueroa and his associates coordinated shipments of the drug from Puerto Rico, which were sent to addresses in Rochester.

Once the packages arrived in Rochester, members of the organization, including 39-year-old Carlos “Big Bro” Javier Figueroa, 42-year-old Roberto Figueroa, and 28-year-old Leitscha Poncedeleon, picked up the packages and took them to another location. The coke was then distributed or broken down and packaged for sale in quantities to be further distributed by others.

Things were running smooth until, in April 2017, one member felt unsafe and, fearing for his/her life, went to the Rochester Police Department’s Major Crimes Unit and Special Investigations Section. The individual told them that Carlos Javier Figueroa was willing to provide a reward for his/her murder and that Figueroa has had people killed in the past.

As a result of this inside information, in December 2017, the Rochester Police Department and Bureau of Alcohol, Tobacco, Firearms and Explosives (ATF) began utilizing court authorized wiretaps and surveilling the area of 6 and 12 Burbank Street in Rochester, believed to be Carlos Javier Figueroa’s residence; 292 Barrington Street in Rochester, believed to be Roberto Figueroa and Poncedeleon’s residence and a stash house where shipments of cocaine are stored; 59 Fernwood Avenue in Rochester, a residence belonging to Carlos Javier Figueroa and the address where at least two packages of suspected cocaine were shipped to from Puerto Rico; and 820 East Main Street in Rochester.

On Monday, during the execution of state search warrants, law enforcement officers seized more than $600,000 in cash, six assault rifles, two loaded handguns, over three kilograms of cocaine, and a quantity of suspected heroin and fentanyl. Police told ABC News affiliate 13WHAM that two suspects were taken to the hospital after police returned fire.

Authorities arrested Carlos Javier Figueroa, Roberto Figueroa, Leitscha Poncedeleon, and 36-year-old Orlando Yelder, 18-year-old Jose Justiniano-Rodriguez, 19-year-old Jashua Figueroa, and 21-year-old Obed Torres, all of Rochester, and charged them with conspiracy to possess with intent to distribute and to distribute five kilograms or more of cocaine, possession with intent to distribute and distribution of five kilograms or more of cocaine, use of a telephone to facilitate drug trafficking and possession of a firearm in furtherance of drug trafficking.

The charges carry a mandatory minimum penalty of 15 years in prison and a maximum of life. In addition, Felix Figueroa was arrested and charged in a separate complaint with distribution of cocaine and conspiracy to distribute cocaine, which is punishable by up to 20 years in prison.