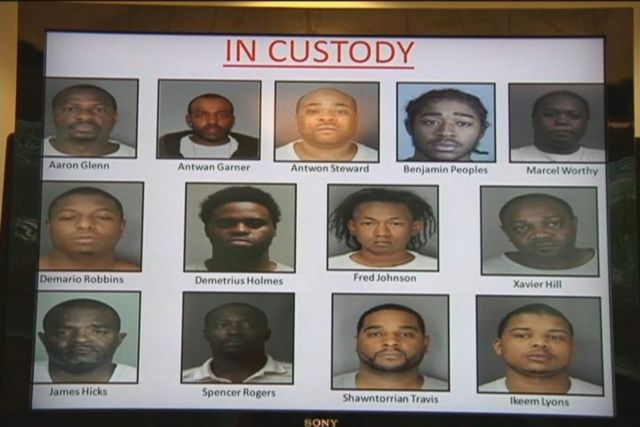 Robert Brown, aka Pee Wee, 52, of Buffalo, pleaded guilty to conspiracy to distribute cocaine yesterday. The charge carries a maximum penalty of 20 years in prison, and a $1,000,000 fine. Authorities claim Brown is an associate of the Schuele Boys Gang.

The Schuele Boys Gang, which operated in the Schuele Street area of the East Side of Buffalo, is believed to be responsible for multiple acts of violence and the distribution of illegal narcotics including cocaine, crack cocaine and marijuana.

Brown is one of 28 Schuele Boys Gang members and associates arrested in this case. To date, 13 of the defendants have been convicted (photo above.) He will be sentenced on January 21, 2016 at 12:00 p.m.

“From time to time, residents of certain neighborhoods have reported their concerns about corner stores being a front for crime,” said U.S. Attorney Hochul. As this case demonstrates, law enforcement welcomes such information, and is committed to closing those locations which are engaged in illegal activities.”

Assistant U.S. Attorney George C. Burgasser, who is handling the case, stated that between June 2013 and July 23, 2014, the defendant bought quantities of cocaine from co-defendant Damario James. Brown then re-distributed the cocaine from his residence in Buffalo as well as from his store “Pee Wee’s Variety Store.”