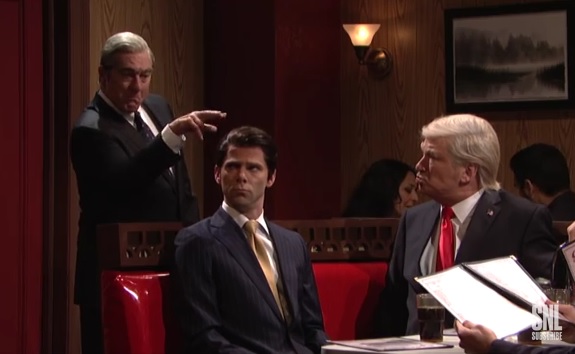 Saturday Night Live finished off its season with a bang last night when it brought in a star-studded cast to parody the infamous final episode of HBO’s The Sopranos. As Journey’s Don’t Stop Believin’ played on the jukebox, viewers were treated to a big show.

With Alec Baldwin’s Donald Trump entering Holsten’s Restaurant in Bloomfield, New Jersey, and sitting down in the booth, it’s clear he’s reenacting the part of fictional mob boss Tony Soprano. It’s not the first time someone paints President Trump as such a gangland figure, who is known for his past contacts and business dealings with mobsters.

In his book A Higher Loyalty, former FBI director James Comey frequently likens Trump to a Mafia boss. He writes: “As I found myself thrust into the Trump orbit, I once again was having flashbacks to my earlier career as a prosecutor against the mob. The silent circle of assent. The boss in complete control. The loyalty oaths. The us-versus-them worldview. The lying about all things, large and small, in service to some code of loyalty that put the organization above morality and the truth.”

The episode opener of Saturday Night Live, however, was all in good fun. With Baldwin’s Trump soon joined by Ben Stiller’s Michael Cohen and Kate McKinnon’s Rudy Giuliani, who told him the following in reference to his Fox News appearances: “Don’t worry, I told them that you were openly colluding with Russia but then I ended with, ‘So what!’”

Stiller’s Cohen appeared a bit down, with all the heat from law enforcement he was facing. “They said I might get twenty years unless I give you up!” he tells Trump. “Well, you can always come visit…”

“I would but… golf,” replies President Trump.

“Anyway, you gotta focus on the good times. Isn’t that what you once told me, boss? That’s why you told me to keep a copy of that Russian pee tape,” added Cohen.

After son Eric is done parking his tricycle – in a parody of Meadow Soprano’s parking skills – the whole gang has a toast to “a great first year of the Russia investigation.”

President Trump isn’t so sure however, when he notices Robert De Niro’s Robert Mueller taking a seat at a table nearby. While the group talks back and forth, Trump remains alarmed by his appearance. When Mueller gets up to go to the bathroom, he looks at Trump and points his two fingers towards him to indicate: “I’ve got my eyes on you.”

Then the screen cuts to black.

Watch the whole clip below: