Rejoice! A brand new season of Sons of Anarchy is upon us and it promises to be one hell of a ride. The latest trailer shows us Jax out for blood and vengeance and some very worried people around him, many with guns drawn. Unfortunately, this will be the series’ last ride as it comes to an explosive end.

It hasn’t been easy for us crime buffs. We’ve been here many times before. First we lost The Sopranos. Then The Wire. And more recently we had to say goodbye to our favorite teacher Mister White in Breaking Bad. All great things must come to an end. Great television series even more so, it seems.

Though Sons of Anarchy was never on the same level as the aforementioned shows, it carved out a piece of its own on television with its unique brand of brash, no holds-barred violence, and over-the-top plot twists that had Michael Corleone’s head spinning.

It also added street cred to its cast as several real life members of the Hells Angels Motorcycle Club played parts throughout the series, most notably the club’s founder and president Sonny Barger. 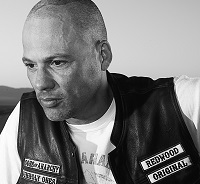 Rusty Coons and Chuck Zito are two other Hells Angels who did their best to play their roles as true to life as possible.

But the most visible Hells Angel on Sons of Anarchy is also the most quiet one. Since season one, biker David Labrava (right) has played the role of stone cold killer Happy Lowman while also serving as a technical adviser for the series.

With expertise like that Sons of Anarchy has grown into a show beloved by many a true crime buff. And the final season trailer (watch below) promises us all the bloody violence, backstabbing, plot twists, action, and drama we’ve come to expect from the show.

Season 7 premieres with a 90-minute event on September 9 on FX.

One last ride. Let’s make it a good one.