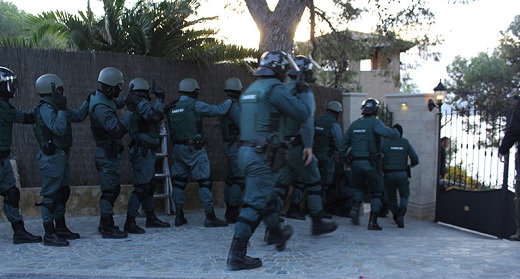 Spanish police, supported by Europol, arrested eight individuals and carried out seven house searches in Mallorca, Spain, yesterday, as part of an investigation into the money laundering activities of the Russian criminal organization Taganskaya.

This investigation began more than twenty months ago, when the Intelligence Unit of the Spanish Guardia Civil discovered criminal links around the main suspect, who was making significant investments on the island of Mallorca, among them the Mar y Pins Hotel (right).

They established that the man was part of the Taganskaya gang from Moscow and that the group might be laundering money in Spain that was obtained from their criminal activities in Russia. The main suspect, who was arrested, seems to have been the mastermind in the network, supported by different straw men and legal and tax consultants.

Besides the charges of belonging to a criminal organization, money laundering, tax evasion and document forgery, the Guardia Civil is investigating other evidence that points to the perpetrators’ involvement in other serious crimes including coercion and corruption.

“Taganskaya is not one of the major groups; it's a lesser, Moscow-based gang which has largely been subsumed within the loose, extensive network known as Solntsevo,” says Mark Galeotti, a professor of global affairs at NYU and author who also writes about (shady) Russian affairs and organized crime for his blog In Moscow's Shadows. “It's main activities are basic crimes such as protection racketeering and some frauds, with the associated money laundering that ensues. They came to Spain like many other Russian gangs - especially Muscovite ones - in the late 1990s and 2000s, when it seemed a pretty comfortable and welcoming location to mix sun and crime.”

Yesterday’s bust is the latest in an impressive offensive by Spanish police to rid their country of the influence of Russian organized crime. Galeotti attributes these successes to an unrelenting pressure by law enforcement. “As Spanish authorities, especially under the legendary Prosecutor Jose Grinda Gonzalez, began cracking down, with a focus on financially-based crimes, each bust and successful prosecution throws up evidence for the next, hence the steady stream of cases,” Galleotti explains to Gangsters Inc.

“That said,” he continues, “there have been successes elsewhere in Europe. The point is that Spain was distinctive in being especially permissive in the past yet turning it around and being much more serious about fighting the Russian gangs now. By contrast, for example, the Italians have always been tough on the Russians, while the Germans have a serious problem but have not been attacking it with the same vigor as the Spaniards.”

The different approaches, Galeotti thinks, reflect a number of variables. “In the case of Italy, the Russians found themselves facing a policing apparatus which has been built to fight powerful domestic crime syndicates and was thus more than ready to deal with them. Most Western European countries, though, didn't really see the Russians as a serious threat: they were coming in flush with cash, buying property and generally boosting the economy. They were not, as had originally been feared, having firefights in the streets or even trying to muscle in on street level criminal operations. Perhaps because so many Russians (and others from the post-Soviet states) had moved there, the Spaniards, though, came to realize the deeper threats from letting Russian dirty money flow into your economy and gangsters embed themselves in your society and thus turned against them. But other countries regard them still as less of a threat, or else have the kind of very enlightened legal system that makes it harder to deal with these networks of flexible criminal entrepreneurs.”