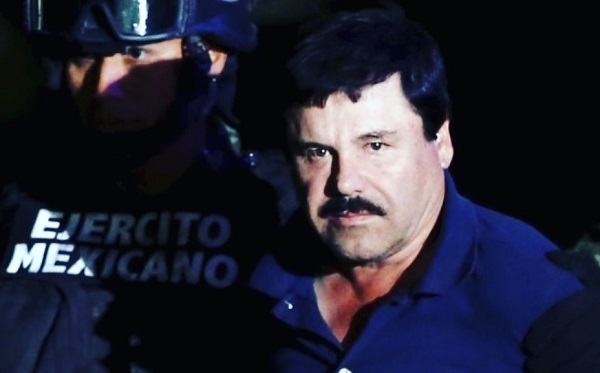 Mexican drug lord Joaquin “El Chapo” Guzman was sentenced to life in prison plus an extra 30 years this morning. The 62-year-old Sinaloa cartel boss was convicted in February by a jury of all charges. He was also ordered to pay $12.6 billion in forfeiture. In court, El Chapo told the judge: “There was no justice here.”

The fallen drug kingpin added that being in prison has “been torture, the most inhumane situation I have lived in my entire life. It has been physical, emotional and mental torture.” Hearing such comments from a man who played a role in some of the most horrific torture, murders on a massive scale no doubt makes plenty of people’s eyes roll.

Trafficking millions of kilos of coke, meth, and heroin

As the principal leader of the Sinaloa Cartel, a Mexico-based international drug trafficking organization, Guzman was responsible for importing and distributing more than a million kilograms of cocaine, marijuana, methamphetamine and heroin in the United States.

At his trial there was testimony of 14 cooperating witnesses, including Sinaloa Cartel members Rey and Vicente Zambada, Miguel Martinez, Tirso Martinez, Damaso Lopez and Alex Cifuentes. They were backed up by evidence from narcotics seizures totaling over 130,000 kilograms of cocaine and heroin; weapons, including AK-47s and a rocket-propelled grenade launcher; ledgers; text messages; videos; photographs and intercepted recordings that detailed the drug trafficking activity of Guzman and his henchmen over a 25-year period from January 1989 until December 2014.

From the mid-1980s until his arrest in Mexico in 1993, Guzman was a mid-level operative of the Sinaloa Cartel, earning a name for himself and the nickname “El Rapido” for how quickly he transported drugs from Mexico to the United States for the Colombian cartels.

After he escaped from a Mexican prison in 2001 by hiding in a laundry cart, Guzman formed an alliance with fugitive co-defendant Ismael Zambada Garcia and, together, they became the preeminent leaders of the Sinaloa Cartel. Guzman Loera enforced his will and maintained control of his drug empire through an army of lethal bodyguards and a sophisticated communications network.

By tunnel, airplane or submarine

The trial highlighted the methods Guzman Loera and his organization used to transport the cartel’s multi-ton shipments of narcotics into the United States, including fishing boats, submarines, carbon fiber airplanes, trains with secret compartments and transnational underground tunnels. Once the narcotics were in the United States, they were sold to wholesale distributors in New York, Miami, Atlanta, Chicago, Arizona, Los Angeles and elsewhere. Guzman Loera then used various methods to launder billions of dollars of drug proceeds, including bulk cash smuggling from the United States to Mexico, U.S.-based insurance companies, reloadable debit cards and numerous shell companies, including a juice company and a fish flour company.

Guzman and his organization relied upon violence to maintain its power throughout the region and beyond. Numerous co-conspirators testified that Guzman directed his hitmen to kidnap, interrogate, torture and slaughter members of rival drug organizations, at times carrying out acts of violence himself. As part of its arsenal, the Sinaloa Cartel had access to weapons, including grenades and a rocket-propelled grenade launcher. Guzman’s personal arsenal included a gold-plated AK-47 and three diamond-encrusted .38 caliber handguns, one emblazoned with his initials, “JGL.”

They also relied on a vast network of corrupt government officials and employees to protect and further the interests of the Sinaloa Cartel. These included local law enforcement officers, prison guards, high-ranking members of the armed forces and elected office holders. In exchange, the Cartel paid these individuals millions of dollars in bribes, which they accepted. It was better to get paid then end up dead with your limbs cut off.

“The long road that brought “El Chapo” Guzman Loera to a United States courtroom is lined with drugs, death, and destruction, but ends today with justice,” said Assistant Attorney General Brian Benczkowski. “Thanks to the unflagging efforts of the Department of Justice and the law enforcement community over the past 25 years, this notorious leader of one of the largest drug trafficking organizations in the Western hemisphere, the Sinaloa Cartel, will spend the rest of his life behind bars.”