The facts behind the Kansas City Mob depicted in Fargo 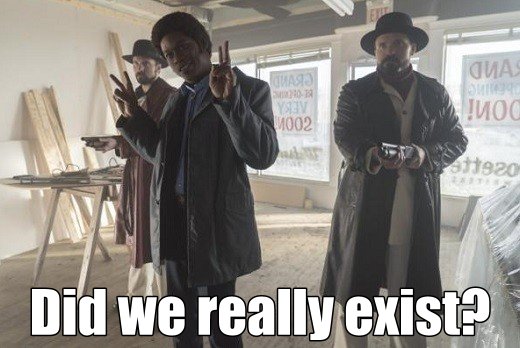 The second season of Fargo, the critically acclaimed television series on FX, is its best so far. With two crime families fighting a bloody war for control over small-town America, viewers are treated to some amazing TV. Still, I wondered, how “true” is the story of the Kansas City Mob battling the Gerhardt family?

Each episode of Fargo begins with the same chilling words: “This is a true story. The events depicted took place in Minnesota in 1979. At the request of the survivors, the names have been changed. Out of respect for the dead, the rest has been told exactly as it occurred.”

Of course, simply changing the names isn’t always enough to disguise those involved, especially when you build your episodes around two powerful crime families fighting a war for control over crime in Minnesota and North Dakota.

For those of you who haven’t followed this season of Fargo – shame on you! – the plot revolves around the Gerhardt crime family which dominates organized crime in Fargo, North Dakota. Otto, the family’s patriarch, suffers a stroke, leaving the “business” in hands of his wife and three sons. All the while, the family is being pressured by the Kansas City Mob to fork over their territory to them.

And this is where the “This is a true story” tagline becomes interesting. Despite maybe changing a few names here and there, it’s not that hard to find out stuff about the Kansas City Mob. For one thing: There was only one such “mob” in Kansas City at the time worthy of that title. And in 1979 it was part of a well-known nationwide Italian American syndicate of Mafia families.

In 1979, the Kansas City Mob was led by Nick Civella and his brother Carl Civella, old-time bosses of La Cosa Nostra, Nick even attended the infamous Mafia meeting at Appalachian. If the producers of the second season of Fargo are truly telling a true story then these guys – and their soldiers - were behind the move on the Gerhardt family.

“There weren’t really any efforts into enemy territory unless they were sanctioned. Nick Civella would not expand into another territory without being sanctioned, in this case North Dakota and Minnesota would be more likely claimed by the Chicago or Milwaukee La Cosa Nostra mobsters,” Gary Jenkins, a former Intelligence Unit detective with the Kansas City Police Department explains. “Las Vegas had been declared open territory to the Midwest mob families when they expanded out there. I have a tape where Nick Civella is commenting on a Wall Street Journal article about how mob boss Joseph Aiuppa and the Chicago Mob are expanding west and all he said was, ‘Oh boy.’ He said it as an explanation like this is not good to have this reported. He was an old school guy who followed the rules.”

He was also a guy operating in much more lucrative areas than Fargo, North Dakota. “In '79 they were heavy into Las Vegas,” Frank R. Hayde, author of The Mafia and the Machine: The Story of the Kansas City Mob tells us. “At other times, they had operations in Grove, OK, Council Bluffs, IA, Omaha, NB, and other Midwestern towns, including to this day college towns like Lawrence, KS, and Columbia, MO, but larger cities? Some activities in Denver prior to the 70's but not much else aside from whatever Chicago might have involved them with. Tony Ripe Civella and various members of his crew spent a fair amount of time in Dallas around 1979, but I don't know how much was business and how much was just golf.  I heard something about Willie Camissano setting up some rackets in Washington, D.C. in the late 80's or early 90's, but I can't substantiate any of it.”

Seems the Kansas City Mob got around pretty much everywhere except Minnesota and North Dakota!

“We had one mobster named Jimmy Duardi make an effort to corrupt local politicians and open up a resort area to gambling and prostitution in Oklahoma in the late 60s and early 70s,” Jenkins continues. “But Oklahoma was not claimed by any other families. He was sanctioned by Nick [Civella] to do this. But to the best of my knowledge, the Kansas City family stayed away from any city or territory owned by another crime family.”

Season 2 of Fargo – spoiler alert – kicks off with a sudden triple murder at a diner in Luverne, Minnesota. Much of the series takes place at this small Minnesota town. Did Kansas City mobsters ever take a trip there to stakeout the competition? Jenkins: “Never in Minnesota. There was some bookmaking and other activities in Omaha, NE, and Council Bluffs, IA. That is the only northern outreach I ever heard of out of our Mob. A Kansas City associate named Joe Agosto had a bank fraud charge out of Minnesota but that was probably his own deal and not part of something bigger.”

One of the best characters in this season of Fargo is Mike Milligan, a Kansas City Mob enforcer played by Bokeem Woodbine (photo below). Milligan is a man who seems comfortable and at ease at all times. Someone who, when he is under attack, throws out gems like this: “Me, on the other hand... I'm an optimist. So when I see this, I don't think the sky is falling. I think that, sir, is the sound of opportunity knocking.”

You can see why the Kansas City Mob chose him as their man to lead the hostile takeover. Now, with all this true story stuff being debunked please let there be a real life version of Mike Milligan, a bad ass African American hitman conquering territory for the mob.

Alas, it wasn’t to be. “That would never be authorized by the tops guys. We had a low level guy who once used some black guys for a hit, but that was not authorized,” Jenkins tells us.

So, there is no true story on which Fargo is based. Does it matter? It aren’t the facts or true story that make this show so great. It’s the riveting storytelling, the exiting plot, the amazing camerawork, and the awesome acting by so many members of the cast.

Still, the makers think adding the “true story” tagline helps the narrative, allowing them to tell the story in a new way. With me now researching the facts behind the fiction, I’ve proved them correct. Fargo has me hooked. I am involved all the way, yearning for a piece of fiction to find its origins in reality. Something that occurred as well while watching The Sopranos or The Wire.

With only three more episodes to go I can’t wait to see what happens next. And that’s a true story!