The Golden Triangle: How Triads cornered the heroin market 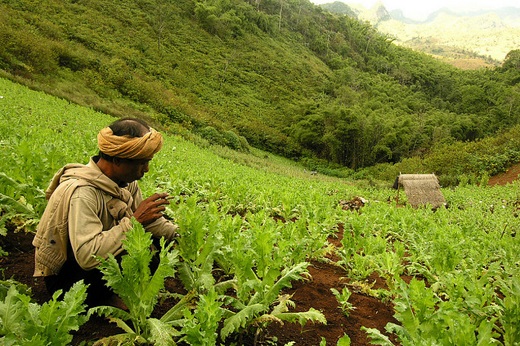 Whether it’s human beings, counterfeit products or drugs, Triads are experts in smuggling the goods from point A to point B. During the 1950s and 1960s, they became masters at flooding Europe and North America with heroin.

With a purity of 90 percent their heroin was of superior quality compared to anything their competitors put out on the streets. It showed in the pricing as it became one of the most expensive drugs out there. Known as ‘China White,’ it became an instant best-seller.

China White heroin was grown in the so called Golden Triangle in South-East Asia, a rugged area of 150,000 square miles. Farmers have huge fields where they grow the opium poppy. Each year the opium is harvested from the end of December to the beginning of March. The farmers then sell their crop to the army, or middlemen, who pay them in cash or goods, like clothing and food.

Several countries are part of this heroin triangle, namely the western fringe of Laos, the four northern provinces of Thailand, and Burma, now known as Myanmar. During the 1970s an estimated 70 percent of the world's heroin came from here. And Triads were involved in getting it from South-East Asia to the backstreets of New York, London, and Amsterdam.

The Triads could fall back on their roots when it came to making contact with heroin suppliers. When president Chiang Kai-shek's Chinese forces were defeated, two of his armies that were stationed in the southern Chinese province of Yunnan fled into the Shan States of northern Burma. There they found farmers with Chinese roots dating back three thousand years growing and harvesting the opium poppy.

With Chiang Kai-shek's former army controlling the growth of opium in Burma, and Triad groups in Hong Kong looking for a good supplier, the contact was easily made. The middlemen would smuggle the raw opium to refineries in Burma near the border with Thailand, there the opium was converted into morphine. As morphine the opium package was reduced to one tenth of its original bulk.

From these refineries it is smuggled into Thailand, which is used as go-between because of its large port in Bangkok from where large drug shipments could be sent to anywhere in the world. But before the shipments are sent, a deal has to be made between supplier and buyer.

These deals were made in Thailand's second largest city Chiang Mai, which is situated over 400 miles north of Bangkok. Back in the 1970s Chiang Mai was known to be a popular tourist destination, but, unbeknownst to the public, it was also a favorite among drug traffickers looking to set up a deal, or those on the run from authorities. Many Chinese traffickers would eventually settle in Thailand, and even traded their Chinese name for a Thai one.

The heroin business remains booming. The Golden Triangle is second only to Afghanistan when it comes to producing opium. Thanks to globalization and a crackdown by law enforcement, the Triads are no longer the most dominant players on the market. Plenty of other parties have joined the fray.

As a result, China White still is a household name on many a street corner in a long list of countries far removed from the Golden Triangle.