The Mancuso ‘Ndrangheta Clan's war against itself 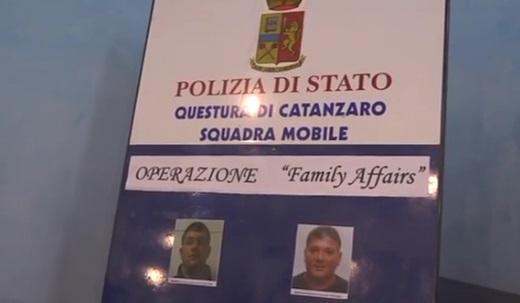 ‘Ndrangheta boss Pantaleone Mancuso was arrested last month as he tried to cross the Argentinian border into Brazil. He is wanted in Italy for Mafia association and two attempted murders and had been on the run since April. Mancuso heads the ‘Ndrangheta’s financially most powerful clan that has connections to drug trafficking groups throughout South America. Mancuso (right) arrived at the Brazilian border in a tourist bus. The 53-year-old ‘Ndrangheta boss used a fake Argentinian ID under the name ‘Luca de Bortolo,’ prompting custom officials in Puerto Iguazu to take him aside. After searching Mancuso’s pockets they found he had €100,000.- in cash on him.

It wasn’t until they ran his fingerprints that they realized they just caught a “Mr Big,” a crime boss wanted by Interpol. Officials quickly contacted their counterparts in Italy and Mancuso is currently awaiting his extradition to Italy.

The Mancuso clan of Limbadi has considerable clout in South America after securing a privileged connection with Colombian cartels. They have been linked to Colombian rebel groups FARC and the AUC.

In Italy, the group’s influence stretches all the way to the north of the country and even as far as Australia. Their activities range from drug trafficking and construction to illegal waste management and prostitution. Topped off with extortion, of course.

Though, the Mancuso clan is among the most powerful ‘Ndrangheta clans, it is also one that is going through a fierce war within its own ranks. Matter of fact, Mancuso fled Italy as a result of his alleged actions in this struggle for power over the clan’s many illegal operations.

In April, Mancuso, along with his 25-year-old son Giuseppe Salvatore, was charged with the attempted murder of Romana Mancuso and Giovanni Rizzo. 69-year-old Romana Mancuso is Mancuso’s aunt, while Rizzo, 42, is his cousin.

Talk about keeping it in the family. When Romana Mancuso and Rizzo arrived at a dusty building site (right) in the Calabrian village of Nicotera on March 26, 2008, Mancuso and his son were expecting them. They had planned a violent ambush that would almost certainly guarantee two dead victims. Father and son (right) used various weapons, including a Kalashnikov submachine gun, as they emptied their clips at the elderly woman and Rizzo who were seriously injured in the process.

Injured, but not dead.

The violence highlighted the split between the various joints of the Mancuso family. There had always been disagreements, investigators said, but until that ambush there was an agreement that none of the Mancusos had to die. “At best, we hit the soldiers,” was the general feeling amongst the well-placed Mancuso clan members.

For authorities, the loud and bloody hit attempt was the start of an intense police investigation. They wanted to solve this case by all means. Wiretaps were placed and people were pressured to talk about the botched hit. With the heat turned on, they finally got members of the inner circle sweating.

One woman, especially, had had enough of the dead bodies, murder conspiracies, lying and backstabbing, and decided to come forward.

Ewelina Pytlarz is the ex-wife of Dominic Mancuso, cousin of Pantaleone Mancuso, and has become the chief government witness against Mancuso. She has given information about what went down that fateful day in March, when the Mancuso family decided that blood may run thicker than water, but it doesn’t pay for a new Ferrari.

Once back in Italy, Pantaleone and Giuseppe Mancuso will have to face her. In front of an Italian judge.