The 1971 hit on New York Mafia boss Joseph Colombo – in public at the second Italian Unity Day rally - was one of the most infamous of its kind. Though the hitman was killed on the scene, questions remained. Four decades later, Colombo’s son Anthony reached a point where he didn’t want to keep the story in anymore. In his book Colombo: The Unsolved Murder, he and author Don Capria detail Colombo’s rise in the mob and the conspiracy that led to his death.

As leader of the troubled Colombo crime family he had plenty of men gunning for his life, but no one expected the attack to go down the way it did. The shooting that brought down Colombo did not occur in some back alley or basement. When assassin Jerome Johnson fired several bullets at Colombo it happened in full view of the public and members of law enforcement.

Why Johnson did what he did remains unknown – he was shot to death at the scene of the crime - as is the person who ordered the murder. Though there is no shortage of conspiracy theories. Countless newspapers and books have covered the assassination, with each offering its own twist to the conspiracy story. 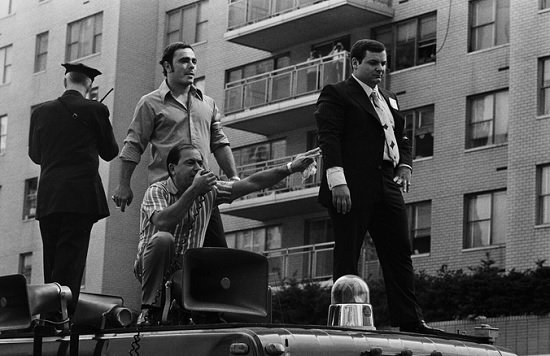 Joseph Colombo, on one knee, with Anthony standing ahead of him.

Most of these accounts, however, were so far off the mark that they agitated one man who was present when the whole thing went down. That man was Joseph Colombo’s son Anthony, who himself allegedly followed in his father’s footsteps, becoming a captain in the crime family that bears his name, and walked next to his dad in the years leading up to his death.

“After 40 years, Anthony had reached a point where he didn’t want to keep the story in anymore,” Don Capria, who co-authored the book with Anthony Colombo, tells Gangsters Inc. When that moment arrived, Capria was there to offer a helping hand.

“I think Anthony had many reasons to get this story told, but the one that he was most vocal about was the false stories that came out about the shooting of his father,” Capria says. “Anthony knew information that did not match up to what the press printed.”

A mutual friend set up a meet on Sunday at a diner in Upstate New York. Capria: “I took the drive up and met with Anthony, his son, and a few close friends of the family. We ate breakfast and he was asking what I knew about his father and why I wanted to write the story. I think I came pretty prepared and I know I left with him interested in another meet.”

Besides meeting Colombo at the right time in his life, Capria also thinks he and Anthony had an immediate connection. “I think there is a level of immediate trust he had for me and as we talked more during the interviews that trust built more and more.”

For the next few months, Capria and Colombo would meet at the Mafia son’s house four days a week. “We began with a lot of the story from Anthony’s perspective,” Capria explains. “We would go over everything from his childhood to his father’s and ancestry.  After I had the bulk of that story archived I researched dates and events in the news media and FBI and NYPD files.”

For several years, Capria devoted most of his time and effort to this book. “It was the most difficult, interesting, satisfying and intriguing project I ever worked on,” he says. “It challenged me every day for two and a half years and still does today.” While researching, Capria went through each and every true crime book that covered Colombo’s shooting. He was astounded by the amount of writers who rehashed the popular belief behind the murder conspiracy. “It was like authors were writing the same passage but dressing it up with different adjectives and verbs. Once I started digging and investigating it was easy for me to see the popular belief is actually the most unlikely story,” he says.

The story he is referring to is the one that says Jerome Johnson was hired by Joseph “Crazy Joe” Gallo and his crew to whack Colombo. The Gallos had waged war on Colombo’s predecessor, Joseph Profaci, and continued their fight against the established powers when “Crazy Joe” was released from prison. Inside, Gallo had allegedly made connections with black inmates, setting up what some reports called a “Sixth Mafia Family” made up out of members of all ethnicities. This, sources claimed, would explain Gallo’s use of Johnson as a hitman.

Capria is having none of it. And neither was Anthony Colombo. 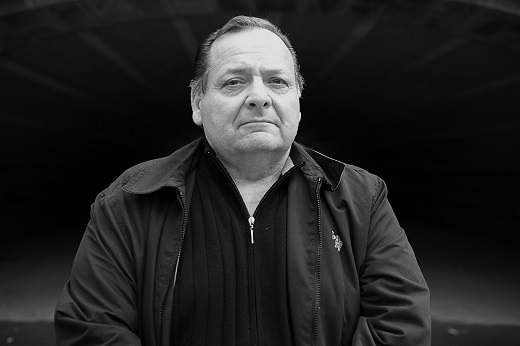 What makes the conspiracy behind Joseph Colombo’s murder such a difficult puzzle to solve is the fact that this man wore so many hats. He headed one of the country’s most powerful Mafia families, involved in everything from gambling to labor racketeering, while also founding and leading the Italian-American Civil Rights League, which stood up for Italian-Americans’ civil rights.

Colombo was not just a simple mob boss, he had become much more. He was of a different breed than most of the crime leaders of today. Capria agrees with that assessment, adding: “I think the era itself bred different men and leaders.”

He then continues with an anecdote that fits perfectly. Capria: “I was interviewing Al Ruddy, producer of The Godfather film, and he told me a story about an FBI agent that would check in on him from time to time after they met in 1971. After Joe Colombo’s death, Ruddy spoke the agent again. When asked about his relationship with Joe, Ruddy said that he enjoyed the brief time and would have liked to have gotten to know him better. In describing the difference between these two eras of organized crime, the agent said to Ruddy, ‘You lived through the salad days of organized crime. These were business men that had certain codes they lived by. They are not like the halfwits that are out there today, murdering everyone.’ He told Ruddy ‘You saw the best of those guys.’”

His son Anthony showed he had inherited his father’s intelligence, Capria tells us. “His knowledge of Italian-American history surprised me. Anthony was a very smart man when it came to civil rights studies and especially those from the plight of the Italian-American immigrant.”

It was Joseph Colombo’s work as a civil rights leader that brought him in even greater conflict with the FBI than he already was. By the 1960, the Feds had increased their surveillance and, Colombo and other mobsters said, harassment of suspected members of the Mafia.

“The FBI was breaking the law to stop men from breaking the law,” Capria explains. “This is why Joe was so obsessed with bringing their wrongs to light. He felt there should be a standard that law enforcement is held to and they should not attack or harass innocent people to catch criminals.”

By bringing to light the FBI’s harsh – some would say illegal – tactics, Colombo placed himself on the Bureau’s list of top targets. While some might read this target list as one filled with criminal to arrest, Anthony Colombo and Don Capria read it simply as a hit list, one filled with enemies of the FBI that needed to disappear. Chief among them Joe Colombo.

In their book Colombo: The Unsolved Murder, Colombo and Capria extensively detail the theories behind the murder conspiracy. While Anthony gives insight into his father’s – and grandfather’s – life in and outside the Mafia, Capria delves into the archives and details the facts that accompany the story. Still, he did not manage to produce a smoking gun, a theory to end all theories.

“I don’t think this project will ever be complete for me,” he says. “I think opening up this cold case file and not finding concrete evidence on who was behind Joe's shooting has left me feeling a lack of closure in my life.”

That is not to say he is uncertain about who was behind the hit. “I have to go with the most powerful boss and gang in the country at that time. That would be J. Edgar Hoover and the FBI,” he says.

What is left are the lessons we can learn from a decade-old story. The primary lesson is simple, Capria tells us. “Power to the people,” he says with a smile. “Colombo showed that organizing small and large groups and protesting a specific problem can make a great difference. He also used the power of boycott. He used Italian Unity Day as a major example of that. They told business to close down, and those that didn’t support the strike were told: ‘If you do not support the Italian-American community today, do not ask them to support you every other.’ This was a power we do not use today. Americans have no standards and communities are so far segregated they do not support each other.”

With the book in stores near you, Capria now has his eyes set on turning his writings into a motion picture or television series. “We hope someone in Hollywood reads this story,” he tells. “It has all the elements of an epic crime tale. We are working on getting the documentary side of this story built first and hopefully that will lead to a major motion picture or TV series.”

If it does make it to the silver screen, it will do so without Anthony Colombo, who passed away of natural causes at the beginning of this year. He was 71.

“He was a great friend,” Capria says. “We continued to speak on a weekly basis for years after the book was completed. He is on my mind daily and will be missed dearly. They don’t make men like Anthony anymore.”

You can buy Colombo: The Unsolved Murder at Amazon.com and book stores near you.

Photo credits: Photos of Don Capria and Anthony Colombo are by Estevan Oriol, cover photo is by Bob D’Alssandro, Joe on car with Anthony is by Corbis Images. Photos courtesy of Unity Press.