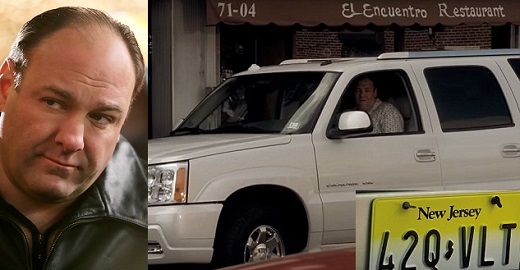 When fans of HBO’s The Sopranos think of Tony Soprano, most of them picture the mob boss with a cigar, his leather jacket on, cruising in his shiny white Cadillac Escalade looking for “cocksuckers” to stomp on. And now fans could live the fantasy themselves because Tony’s white Cadillac is going up for auction.

On November 12, Boston-based RR Auction is putting Tony Soprano’s 2003 Cadillac Escalade ESV up for what looks set to become a bidding war on par with the gangland antics The Sopranos was famous for.

According to Associated Press, the Cadillac was featured on-screen during the final three seasons of the show and RR Auction executive vice president Robert Livingston says, “the car's interior bears two autographs from actor James Gandolfini - one on the inside of the driver's side sun visor and another on a panel above the glove box.”

"This vehicle was also utilized in action sequences including the infamous chase from season five in which Tony, angrily trying to collect a debt, drives Phil Leotardo off the road and into a parked car," RR Auction's website shows.

Gandolfini sadly passed away in 2013 while in Rome, Italy. His acting turned Tony Soprano and the series as a whole into a global cultural phenomena and one of HBO’s biggest hits.

UPDATE: After a successful auction, an anonymous buyer came out on top putting down $119,780 for the fictional mob boss' car.