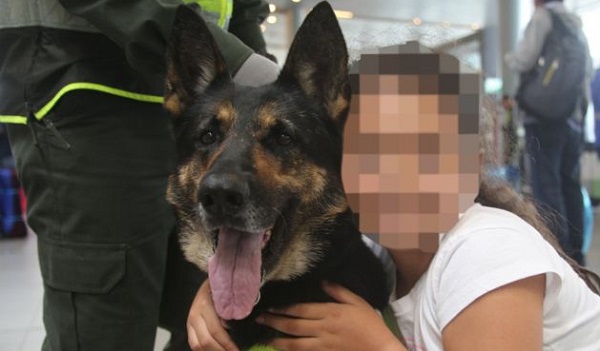 One of Colombia’s most powerful drug cartels had enough of losing cocaine shipments and placed a $70,000-dollar price on the head of their main nemesis: a police dog. The German shepherd named Sombra, which translates as Shadow, has had so much success in sniffing out the cartel’s product that she has become a prime target for sicarios.

According to the BBC, Colombian intelligence claims Colombia’s Urabeños cartel put up a 200 million-peso reward for Sombra's head after she discovered nearly 10 tons of the group’s coke. “Sombra (photo above) has been with the counter-narcotics police force since she was a puppy and is credited with sniffing out drugs leading to the arrest of 245 suspects,” the BBC reports.

The death threat has earned Sombra a change of workplace. For security reasons she has been moved to Bogotá airport, which is considered safer since it’s outside the cartel’s territory. While she’s searching for dope at the airport, Sombra will be accompanied not just by her handler, but by extra security officers.

The Urabeños have placed prices on the heads of members of law enforcement before. “In 2012, police found leaflets signed by the gang offering $500 to anyone who killed a police officer,” the BBC adds. “The vastly bigger sum the Urabeños are offering for the killing of Shadow is indicative of the financial losses her sensitive nose has caused them.”

That same year, in Rio de Janeiro, Brazil, a local gang issued a similar threat to a 5-year-old labrador named Boss, who had found over 660 pounds of cannabis inside a false wall. “Police patrolling the favela in the north of the city intercepted a radio message from the trafficking kingpin with an order to ‘target brownie’ – a reference to the dog's color,” The Telegraph reported.

The gang had tried various methods to hide their product from him. They hid one batch of drugs next to an open sewage drain, but Boss still found it. After the threats were received, Boss was accompanied by nine extra policemen on his workdays.

“We see this as a normal situation,” Major Vitor Valle, of Rio's military police dog squad, told The Telegraph. “Every one of us is at risk who are working against drugs trafficking. A dog can also be threatened, especially as our dogs have helped find more than 1.5 tons of drugs in the last year. It won't stop us, or him, doing our work."