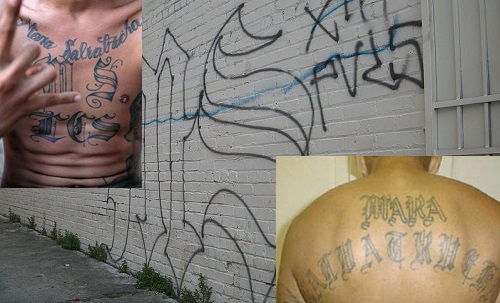 Two members of MS-13 who were convicted of racketeering and murder were sentenced to life in prison on Tuesday. 22-year-old Miguel Zelaya and 37-year-old Luis Ordonez-Vega had been indicted along with almost forty other MS-13 gangsters, 32 of which have since been convicted. Three remain a fugitive.

Zelaya, who goes by the nicknames “Most Wanted” and “Ne Ne”, is a member of the “Coronados Little Cycos Salvatrucha” clique. On December 18, 2013, he shot and killed Jose Orlando Ibarra, an associate of The Latin Kings gang. Zelaya admitted to law enforcement that he shot Jose Ibarra because Ibarra owed him money for a gun and because Ibarra and his brother, a Latin King member, had been looking for one of Zelaya’s “homies” with a shotgun.

Ordonez-Vega, known on the streets as “Big Boy,” is a self-admitted member of MS-13 from Nassau County, New York, and a member of the “Brentwood Locos Salvatrucha” clique.  Ordonez-Vega has “MS” tattooed across his stomach and “La Mara Salvatrucha” tattooed across his chest. On June 6, 2013, Ordonez-Vega shot and killed Noel Navarro Hernandez in a strip mall parking lot in Charlotte.  Ordonez-Vega and other MS-13 members targeted Navarro because they believed that Navarro was a rival gang member because of the way he talked, wore red, and his haircut.

A third MS-13 gang member, 27-year-old Jorge Garcia was also sentenced Tuesday to 70 months in prison and two years of supervised release, after pleading guilty to a RICO conspiracy and attempted murder in aid of racketeering charges.

MS-13 members adhere to a set of gang rules and pay dues which fund the gang’s criminal activities and support other gang members or their families in the U.S and abroad.  Gang members are also expected to protect the name, reputation, and status of the gang and its members, and to punish through acts of violence and intimidation those who disrespect the gang.  Some MS-13 members signify their affiliation with the gang by wearing blue, black and white color clothing and certain “Mara Salvatrucha,” or “MS-13” tattoos.