Unsung Heroes: The fixers who help tell the stories of the violent drug underworld 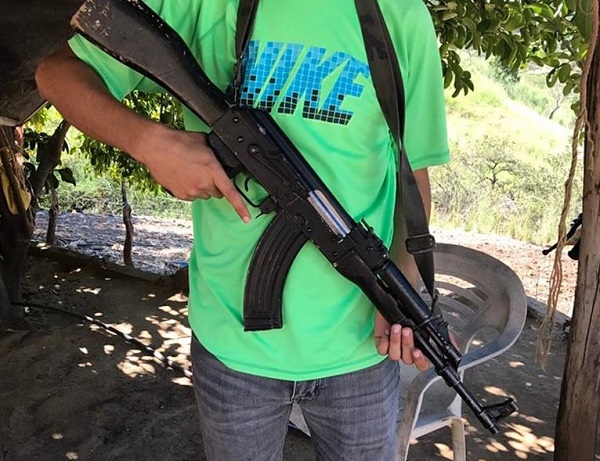 Over the past few years, I’ve been putting together a book, Dopeworld, about the international war on drugs. I’d be lying if I said I didn’t have a horse in this race, having spent a year in the hoosegow for distributing various brain-tickling treats, and I drew upon that experience. I’ve also travelled all over the globe, speaking to cops, killers, addicts, smugglers, senators, Satanists, doctors, beauty queens, grieving parents, federal agents, Russian mobsters and the yakuza.

People always ask me how I find all these characters. Some are pretty open about what they do and then you can just email them directly. Others are personal contacts or friends-of-friends from back in the day. A couple of times I just thought ‘fuck it’, took the easy way out and hopped on a tour bus. But in certain places where I didn’t know the language or the lay of the land, I needed a special kind of guide.

“You have the ideas, we make it happen,” said Miguel Ángel Vega, my man in Mexico.

Miguel’s a fixer, one of those unsung heroes that make it possible for hacks like me to pretend we’re journalists. When you see someone like Ross Kemp meeting Mongolian Nazis, it’s not because he personally knows Genghis Führer and just decided to rock up; it’s because he’s got in touch with a local journo who’s spent years building up contacts and earning their trust before offering their services as a go-between. Fixers are your guide in a foreign land, helping you score interviews and translating when tu no hablas español.

Based out of Sinaloa, northwest Mexico, Miguel plies his trade in one of the most dangerous countries in the world for the media profession.

After Pablo Escobar’s death and the fall of the Colombian cartels, the Mexicans moved in to take their place and before long dominated drug trafficking in the Americas. The cartels’ main business is smuggling coke, dope and meth into the United States. For a long time, it was in the interests of everyone involved – police, politicians and crime bosses – to make sure there was peace and quiet and everything ran smoothly. That is until 2006, when President Felipe Calderón declared war on the cartels and sent in the army to take out their leaders. But you see, once you eliminate the boss, all his henchmen are gonna want to fill his shoes… at the same time. That, along with being next to the biggest drug market in the world (the United States), and the onset of democracy in the early 2000s which upset the old order and it’s delicate system of narco-trafficking plazas, made Mexico’s drug wars deadlier than Afghanistan and Iraq.

I needed a fixer; it’s not like I can show up as a dumb gringo tourist and go around the dive bars, asking burly muchachos in cowboy hats for directions to the nearest poppy field. Miguel is a filmmaker and journalist who grew up in Culiacán, Sinaloa, but after his second film bombed at the box office he was slumming around, looking for a job, when he got a call from an American journalist for someone to show him round the city. 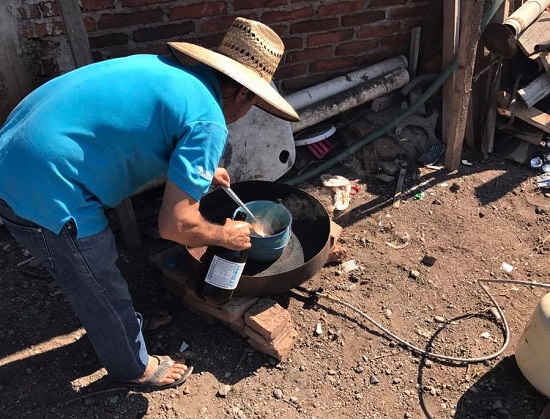 “I felt bad – I didn’t wanna be someone’s guide dog or driver,” he explained. “But I took the job and then someone else came asking. They ended up hooking me up with other journalists and that’s how I got started.

Show me a meth lab

Everyone in Culiacán has relatives or at least knows someone who’s in the business. So when someone asks to see a meth lab, or a fentanyl lab, or a poppy field, all I have to do is make a few calls. Eventually demand got so high I started hiring other guys and they also know people, and that opened more doors.”

Ángel’s job is more than just calling drug lords and asking to drop in. He’s also got to walk that tightrope between staying on friendly terms with the narcos and getting reporters what they want.

“The secret if you wanna do well and stay alive is always stick with the truth and be nice, no matter what, cos the minute you’re rude to people or not speak the truth you’re in real trouble,” Miguel told me. “The people I work with know I’m a journalist, and they know I’d never tell anyone where a heroin lab or a stash house is located, or reveal their real names or identities. It’s a matter of honor. If you fuck it up they won’t be like ‘OK, we’ll give you a second chance’; they’ll just fuck you up. And they have lookouts on every corner, so they know where you’re gonna be.” But even with those rules, it’s a risky occupation. One time Ángel was filming an interview with a fugitive hitman in the back of a car who was holding an AK-47. They stopped in front of a traffic light when a convoy of soldiers pulled up in front of them. One of the soldiers spotted the gunman and shouted something, pointing at them, and the driver, who was also a hitman, hit the gas. Miguel and the cameraman feared for their lives as the driver sped away after doing a U-turn, running every red light before finally stopping in a hotel parking lot.

“Another time I was with a European film crew, driving around a small town,” Ángel said. “I told them to stop filming and they didn’t listen so I got a bit angry and said I’m gonna quit, but then we turned a corner and there were about 20 guys with AR-15s.”

Mexico’s not officially a country at war, but between the army, rival gangs and vigilantes, it’s not uncommon to run into patrols and checkpoints manned by whichever armed faction controls the area.

“We had a car with a licence plate from another state that was at war with Sinaloa,” he continued. “They held guns at us, beat one of them up. This guy held a gun to my forehead and said, ‘who the fuck are you?!’”

For a few tense moments, Miguel thought he’d be executed on the spot.

“I said we are all journalists. He saw my ID and said, ‘if you’re not who you say you are, I’m gonna kill you right here.’ I told him these are foreign journalists – if you do something this whole place is gonna burn down to the ground. He said, ‘are you fucking threatening me?!’ and I said no, I’m just telling you.”

Miguel’s contacts came through and defused the situation, but it was a close call. People ask me if Mexico’s dangerous but as an outsider, it’s relatively safe for me. He’s the one putting his neck on the line.

Sinaloa’s not the most violent state in Mexico, but it’s seen its share of killing, with one particularly bloody ‘business dispute’ erupting in 2008 and another nine years later. For Ángel, while the gruesome sights grew normal, only a true psychopath gets used to the loss of human life.

“You can deal with many things,” said Ángel, “but you can’t deal with human pain. Sometimes we’ll go to a crime scene where a gunman’s just been killed, and you get used to that; it’s just a dead body. But the human pain, you never get used to: when you see a mother, brother, sister or uncle just get to the crime scene. That’s when you think, ‘what the hell am I doing here?’”

The danger is real. A few months before we met, Ángel’s friend Javier Valdez was murdered. Javier was the founder of Ríodoce, a Sinaloa-based newspaper that often runs exposés on drug traffickers. Valdez was caught up in a power struggle between two factions of a cartel, who each wanted him to publish different things. Then in 2017, he was gunned down just a few steps from his office. “He was such a funny guy, always in a good mood. He was an idealist; he believed he could change things with his work,” Ángel recounted. “Then on May 15th, he was shot to death. That’s one of those things you don’t believe, and still now I don’t believe what happened. But it makes you realise these people are for real – they don’t care, they can kill you anytime, anyplace, if they want.”

This wasn’t the first time the newspaper had some trouble – in 2009, someone threw a grenade at their office. Things like that aren’t a one-off, freak occurrence either. Since the outbreak of the drug war, the number of journalists meeting untimely ends has shot up dramatically. Certain parts of Mexico are under a total media blackout, whereas in others, journalists get caught in the crossfire between cartels who want them to shut up or scream about the latest mass execution. In 2010, after the deaths of two of their employees, the frustrated editors of one newspaper in Juárez, in the north of Mexico, issued the following statement:

“Gentlemen of the different organizations fighting over the territory of Juárez ... We bring to your attention that we are communicators, not mind-readers. For that reason… we want you to explain what you want from us, what you want us to publish or stop publishing, so that we know what to stick to. You are, at the moment, the de-facto authorities in this city, because the legally instituted powers have been able to do nothing to prevent our colleagues from continuing to fall.”

Afraid of reporting on cartels back home, Mexican journalists look for other ways to get their stories across. Some run anonymous blogs, like the Blog de Narco. Others have their work printed across the border, like the Cartel Chronicles published by (dare I say it) Breitbart.

Without brave guys (or foolhardy adrenalin junkies) like Miguel Ángel Vega or Sherbien Dacalanio in the Philippines, I wouldn’t have been able to finish Dopeworld. It’s as much their work as it is mine.

Last year Mexico elected a new president, left-wing populist Andrés Manuel López Obrador (affectionately known as AMLO), who’s promised to end the drug war, which has claimed 150,000 lives already. It’s not clear exactly how this would work, but the AMLO government has mulled allowing certain drugs, or at least weed, to be sold lawfully, taking the mob out of the picture.

Cut off the head

I’m not sure how much good that would do in stopping the cartels, since the fiercest fighting is at the border towns over who gets to smuggle to America (which isn’t in a hurry to legalize crystal meth anytime soon). So I asked Ángel if there’s any way out of this bloody mess.

“They declared war on the cartels but they’re not going to win, not with this strategy. They bust one drug lord, two more pop up. It’s like the head of the Hydra – that monster is real, and it is narcotraffic. They cut off one head and two more will emerge. If they cut off two heads, four will emerge. Maybe when they realize it’s a public health issue, not a law-and-order issue, and we inform our youth what will happen if you use crystal meth, coke, heroin, maybe there will be peace.”