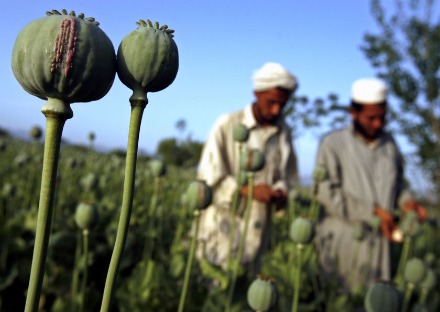 As U.S. military wage "deadly" war against the Taliban-Al qaeda regime in Afghanistan, the U.S. Treasury department has stepped up their efforts to disrupt the flow of billions of dollars from the Afghanistan heroin-opium trade that is illegally laundered throughout the country's financial systems, money that U.S government say helps the Taliban to spread terror throughout the world and undercutting battlefield progress being made by the U.S. and allied forces.

Friday, February 18th, under the 1999 Foreign Narcotics Kingpin Designation Act which target major foreign drug traffickers, their organizations and allies who act on their behalf the U.S. Treasury department sanctioned the New Ansari Money Exchange, one of the largest financial institutions in Afghanistan.

The New Ansari, according to U.S. government is a lucrative money transfer firm with direct ties to heroin and opium dealers including discreet connections with the Taliban and senior members of President Hamid Karzai's adminstration.

The much needed sanctions were issued after an investigation by U.S. Treasury officials, the U.S. Drug Enforcement Administration and the Afghan Threat Finance Cell, an interagency center that collects, analyze and transmit relevant financial intelligence on individuals and organizations involved in financing the insurgency of terror in Afghanistan and throughout the Middle East including some areas in the United States.

"Today's designation is another important step in our ongoing efforts to target money laundering and narcotic trafficking activity in Afghanistan," said Stuart Levey, the undersecretary for terrorism and financial intelligence in the U.S. Treasury department. "We will continue to work to expose the funding and support mechanism for such illicit activity, taking action to safeguard the United States and Afghan financial sectors from abuse."

With U.S. sanctions levied against the Afghan underworld of drugs and money laundering now the outlaws have a tenacious man to deal with.

U.S. Treasury Secretary Stuart Levey, a lawyer, hired under the Bush adminstration to oversee the Treasury department is a savvy and tough government authority on foreign money laundering---so tough, according to Newsweek magazine, he is feared and hated in Tehran and referrred to as a U.S. zionist agent by Iran's finance ministers.

Much of Levey's success in cracking, complex money schemes was inspired by unorthodox techniques by U.S. governement when they pressured the Swiss and German banks to expose the Holocaust assets. According to recent news reports, Levey's next target is to disrupt the Iranian Revolutionary Guard, described as a radical group responsible for taking control of the country and its economy. The Iranian Guard also been identified as taking money from the Haji Khan heroin organization to help maintain operations. 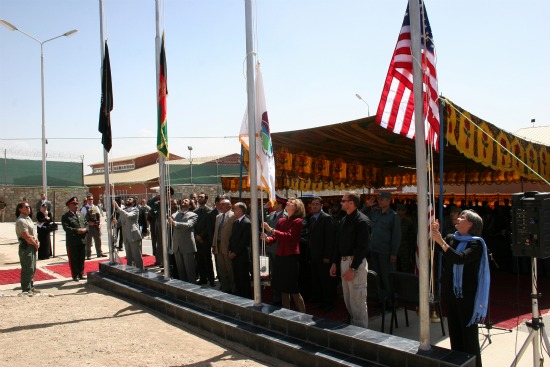 Since its liberation from Taliban rule, the Afghan heroin-opium trade skyrocketed to epidemic proportions. Therefore its no secret the extensive money laundering schemes in Afghanistan is the machination of the billions made from the heroin trade.

Although heroin is not traded on any stock exchange but this mind-altering dope is one of the most valuable commodities in the world even more valuable than gold.

Example, a ton of crude oil may cost up to $290-$300 millions but a ton of heroin cost $67-$70 million in Europe and the cost range is estimated between $360 million to $900 million in New York, according to recent available DEA figures.

Afghanistan supplies over 90% of the global opiate market. "This is a source of income for the warlords and regional factions to pay their soldiers," former Afghan Interior Minister Ali Ahmad Jalili said in a 2005 interview with Reuters news service.

While attending a 2010 security conference in Singapore---Russia's Deputy Prime Minister Sergei Ivanov declared Afghan drug trafficking as a threat to International peace and security. "Narcotics have become the important source of financial support for insurgency groups including the Taliban."

The New Ansari Money Exchange and their affiliates operate money transfer businesses throughout Afghanistan including the United Arab Emirates. U.S. government alleged between 2007 and 2010, the New Ansari used the billions received from drug dealers and transferred the funds in-and-out of Afghanistan to hide the illegal narcotic proceeds.

Owners of Money Exchange also transferred money to a connection identified as Green Leaf General Trading LLC and Al Adal Exchange. These associates, both Dubai subsidiaries, would transfer money into the U.S. and international financial systems.

Intelligence evidence have showed that the New Ansari Exchange, at one point, transferred so much money until the scheme triggered a drastic change in Afghanistan's exchange rate.

According to U.S. Treasury officials, the New Ansari laundered money for the Ali Azizullah and the Haji Juma Khan Organization, both identified in June 2007 and May 2009 as foreign narcotic traffickers by the U.S. DEA. Alizai is a known heroin trafficker and supplier located in Southwest Asia and the Middle East.

The Haji Juma Khan outfit is an international opium, morphine, and heroin trafficking group based in the border regions of Iran, Pakistan and Afghanistan.

Following a police raid on the Kabul Bank in January, 2010, evidence surfaced that the operators of the New Ansari Money Exchange appealed to President Karzai to discontinue the investigation related to the Afghan citizens.

Some months later, special Afghan investigators arrested one of Karzai's key administrators for taking bribes to quash the U.S.-Afghan investigation. When Karzai demanded the man be released without charges, this action sparked rumors of a cover-up.

Mahmood Karzai, the brother of President Karzai, who also own a 7% stake in Kabul Bank, is under investigation by a federal grand jury in New York for racketeering, tax evasion, and extortion. He has denied wrongdoing.

As part of the burgeoning corruption and ceaseless accusations swirling throughout the Afghanistan government and the local businesses, former Interior Minister Haneff Atmar was accused of accepting questionable loans from Kabul Bank.

Atmar told foreign reporters the evidence against him amounts to pure fabrication and was intentionally fed to investigators because of his ties to the U.S. by spearheading the Major Crime Task Force to clean up pervasive corruption within President Karzai's administration.

"I am probably the most hated of all people accused of taking payoffs from the Kabul Bank because it was me...who pressed the investigation against the New Ansari Money Exchange. They call me an American spy."

Among those under U.S. government sanctions for their involvement in laundering drug money for the New Ansari are:

"The New Ansari network is yet another example of money launderers exploiting legitimate financial systems to launder their ill-gotten gains, including illicit drug proceeds, as part of their criminal enterprises," said DEA administrator Michele Leonhart.

"Cash is the ultimate commodity for these criminal networks and these proceeds often fuel insurgent activity and corruption, while undermining the authority of developing governments."

Internationally, the Treasury Department has designated the Foreign Drug Kingpin Act on more than 900 businesses and individuals linked to 87 drug kingpins since June 2000.

Penalties for violations of the Kingpin Act range from civil penalties up to $1.075 million for each violation including serious criminal punishment. For criminal violations, corporate officers face up to 30 years in prison with a fine up to $5 million.

Criminal fines for corporations may exceed to $10 million, while other individuals face up to 10 years in prison and fines, pursuant to Title 18 of the U.S. code for criminal violations of the Kingpin Act.