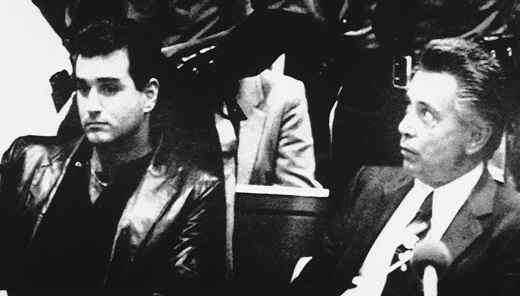 He may have been diminutive, but mob boss “Little Nicky” Scarfo turned the city of Philadelphia into a war zone during his reign atop the Bruno crime family. As he ordered murder after murder, his nephew Phillip “Crazy Phil” Leonetti was by his side, ready to go out and kill for La Cosa Nostra.

But when the smoke cleared and the blood dried, several mobsters were so afraid that they joined Team America and testified against Scarfo and Leonetti in court resulting in lengthy prison sentences for the both of them.

While behind bars, Leonetti had a change of heart and called the FBI to offer them his services.

Back in 1996, Leonetti sat down with reporter Forrest Sawyer of ABC Primetime to discuss these events down to the bullet. Most unsettling is Crazy Phil’s response to why it might be weird that he is now together with the girlfriend of a good friend of his who died by his hands. A must-see.

Check out the entire ABC Primetime interview with Phil Leonetti below: