VIDEO: Philly Mafia boss says he’d kill all terrorists, hang them in front of their homes – If government paid him 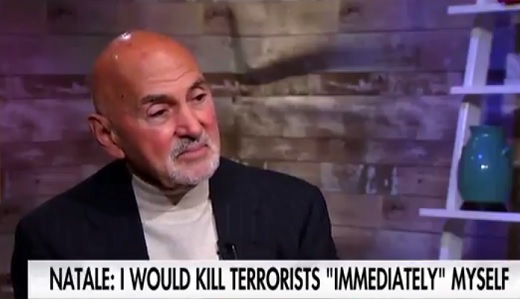 Move over SEAL Team Six! You guys have tried and failed. You’ve been like “pussycats” while fighting terrorists! At least, that’s what former Philadelphia Mafia boss Ralph Natale thinks. In an interview with Fox News the 82-year-old mobster shares his simple formula for dealing with terrorism.

“I wish I could get four more and me,” the elderly former mob boss begins. “The government would have to pay,” he adds quickly, “but they would be glad to.” Well of course they would.

“Soon as they would point out a crew, give me their names, I’ll take care of the business,” Natale says confidently. “I would kill ‘em all!” the aging gangster yells at the perplexed Fox News reporter.

Natale: “I would kill them immediately and then I would hang them in front of their houses and then call the newspapers and tell them ‘Come see what happened to those people.’ I could make a nice living and I could enjoy it.”

There you have it. Natale’s family recipe for dealing with terrorism.

If only he had dealt with his enemies in the Philadelphia mob in such a way. Because instead of assembling a hit squad, he opted to join the FBI and prosecutors, telling them all about the Mafia and testifying in court against his former underlings. Would that modus operandi work well with terrorists too?

For more of Natale’s ramblings on terrorism and world affairs, check out the video below: