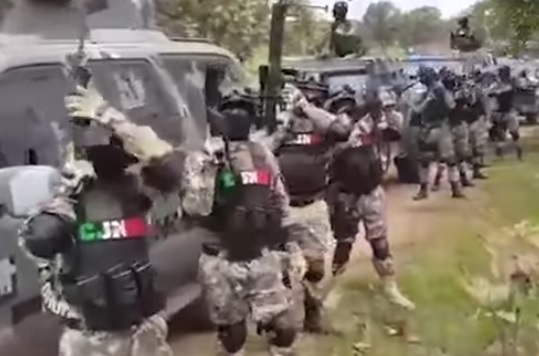 The Jalisco New Generation Cartel is the most powerful drug syndicate in Mexico and remains fiercely loyal to its fugitive leader Nemesio Oseguera Cervantes, known best by his nickname “El Mencho”. At least that is what the cartel’s PR division wants us to believe with the release of a new video.

The 3-minute video shows scores of masked men in uniforms emblazoned with “CJNG” armed with automatic rifles in front of rows of armored vehicles. As the camera man walks past them, each man raises his weapon and chants “El Mencho” in support of the leader of the Jalisco New Generation Cartel.

It is an explicit display of power and strength.

Busts and drug lord’s children locked up in US prison 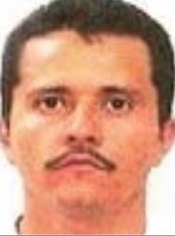 One the Jalisco New Generation Cartel could really use at this moment as it has been dealt some heavy blows by both Mexican and U.S. authorities in recent years. In March, a DEA-led interagency operation targeting the cartel culminated in more than 600 arrests, 350 indictments, as well as significant seizures of money and drugs.

To add to that blow, two of drug lord Oseguera Cervantes’ (right) children are currently in an American prison cell. El Mencho’s son, Ruben Oseguera Gonzalez, also known as “Menchito,” and second in command of CJNG, was extradited from Mexico to the United States in February on drug and weapon charges. On February 26, El Mencho’s daughter, Jessica Johanna Oseguera Gonzalez, was arrested on financial charges related to her alleged criminal violation of the Foreign Narcotics Kingpin Designation Act when she tried to visit her brother in court.

These kinds of things don’t happen to an all-powerful drug lord who is in control of his world. They happen to an embattled crime boss who is being hunted by authorities on both sides of the border. 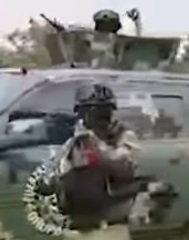 El Mencho built his drug empire on unrestrained violence against anyone or anything that blocked its rise. They slaughtered hundreds of police and government officials for interfering with their narco business. When they arrested Oseguera Cervantes’s son, the Cartel shot down a Mexican army helicopter as repercussion in 2015. It was a never-seen-before action. And the Jalisco New Generation Cartel was the first to do it.

It got the Jalisco Cartel to the top, but it seems it now is realizing that different methods are needed if one wants to stay there. With authorities closing in despite the acts of death and destruction, they now turn to good old-fashioned propaganda videos.

The flex of muscle shown in the video is impressive and intimidating, especially for those of us living in a country where the rule of law is still governed by the state. But it also makes one question whether this indeed is the sign of strength that it tries to portray.

It reminds one of the scene in Game of Thrones: “Any man who must say 'I am king' is no true king at all”.

Barking dogs don’t bite. This one still does bite, of course, but perhaps not as hard as it used to – or as hard as the Cartel wants us to believe.