By Hollander (regular poster at the Mobbed Up Forum)
Posted in 2005
Copyright © www.gangstersinc.nl

The Yamaguchi-gumi, Japan's largest underworld gang has been thrown into chaos and uncertainty following leader Yoshinori Watanabe's announcement late 2004 that he would "take a break" from his responsibilities. On Nov. 12, the Supreme Court ruled that Watanabe was legally responsible for the actions of Yamaguchi-gumi mobsters. The lawsuit had been filed by the family of police sergeant Takeshi Fujitake who had been fatally shot by a mobster in 1995. Fujitake had been posted at a gang office in Kyoto to watch over a gang warfare that was heating up during August 1995. Two members of the Yamaguchi-gumi mistook Fujitake as a member of a yakuza gang connected to Aizu Kotetsu-kai and gunned him down in cold blood. The two are currently serving time for killing the 44-year-old officer. The Supreme Court ruling was a great surprise to gang members, some of whom got angry at Watanabe for not doing more to defend the syndicate. 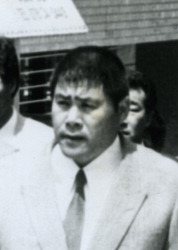 Under the leadership of Yoshinori Watanabe Yamaguchi-gumi has grown into one of the world's most powerful criminal enterprises. In 1961, during a war with a rival gang, Watanabe was charged with weapons possession and served just over a year in prison. During the so-called Osaka gang wars in the mid-1970s, he was arrested once again for weapons possession. After his release, he continued to gain more power, becoming leader of Yamaken-gumi in 1982 and moving up the ranks within Yamaguchi-gumi. The Kobe-based Yamaken-gumi, a 7,000-member section, is the strongest and most influential among the gangs. The enactment of a law to crack down on organized crime in 1993 took a big bite out of the Yamaguchi-gumi's activities. But Watanabe worked on expanding traditional yakuza businesses like gambling, sex and drugs. He invested in the stock market and has expanded the empire to legitimate businesses as hospitals and chemical companies. The structure of the Yamaguchi-gumi is complex. Police estimated the total number of official members at about 18,000, with an unknown number of unofficial members. Watanabe is flanked by two advisers, Kazuo Nakanishi and Otomatsu Konishi, both of whom once challenged him for the leadership role. Below Watanabe are a group of 11 "Council" members. These are senior bosses, based mostly in the Kansai region, who set policy for Yamaguchi-gumi as a whole. The Council is headed by Saizou Kishimoto, head of Kishimoto-gumi and Yamaguchi-gumi's de facto second in command. A typical Japanese crime organization operates via a pyramid structure. Numerous groups exist under the umbrella of major crime syndicates, with each of the groups also having a number of subgroups. The 2004 Yamaguchi-gumi telephone directory, issued by the syndicate itself, lists 101 gangs. Monthly meetings bring together the gang bosses from around Japan who gather to hear the Council's decisions. Watanabe does not attend these meetings, sending his message through Kishimoto. While Kishimoto's announcement might focus on general matters, much of the concern the gang bosses have is related to practical matters like money.

Although the assassination of gangboss Masaru Takumi in August 1997 and subsequent shootings around the nation have kept the gangs in the headlines, compared with 15 or 20 years ago the yakuza in general are less visible. Masaru Takumi, considered by many to be Watanabe's heir apparent, was gunned down at a popular Kobe hotel during a gang war. Harutoshi Zaitsu, member of the Osaka-based Nakano-kai, one of the most notorious gangs, ordered the assassination. Two of the four shooters have given themselves up and expressed remorse for murdering an innocent dentist who was sitting nearby, but Harutoshi Zaitsu and the two other killers, Kiyoteru Toriyabara and Kouji Ishihara have been on the run. As a result of the assasination of Takumi many Nakano-kai members were arrested. Not only are Zaitsu, Toriyabara and Ishihara being hunted by the police, but members of the Takumi-gumi are also said to be seeking revenge for the killing. On the afternoon of April 20, 2002, a man rode his motorcycle up alongside the car in which gang boss Kenji Hirota was traveling. He pulled out a gun and shot several times into the front passenger side of the car, where the mobster was seated. The female driver of the car tried to speed away, but the the hitman kept up until he could pump one more shot into him before fleeing. The 54-year-old Hirota died of his wounds shortly after. Police believe the killing was part of the continued warfare between the Nakano-kai and its former parent organization Yamaguchi Gumi. Hirota, the reputed number two of the Nakano-kai, has been on the wanted list for some time in connection of an alleged golf-course development fraud. A mobster is arrested in July and he admits the assassination. In 2004 during a yakuza trial in Osaka, prosecutors said 66-year-old Takashi Takizawa, a senior boss of the Yamaguchi-gumi, knew his bodyguards were armed to protect themselves from attack by members of the Nakano-kai. Takizawa was grilled after he left a hotel in Osaka on Sept. 20, 1997, and the five mobsters with him were arrested. Takizawa and 62-year-old Kenichi Shinoda, another boss who was with Takizawa at the hotel, managed to flee and were placed on a wanted list. Shinoda surrendered himself to police in June 1998, while Takizawa, head of the Horyo-kai, was arrested in July 2001 after almost four years on the lam. Prosecutors had demanded a 10-year prison term, but the Osaka District Court dismissed the prosecutors claim. In a separate trial, Shinoda, head of the Kodo-kai, was sentenced to six years imprisonment in a Osaka High Court ruling that overturned a district court decision. The Kodo-kai is a Nagoya-based gang with about 2,000 members, Shinoda knew that his bodyguards were armed.

Those familiar with the gang says the Yamaguchi-gumi is placing more of a focus on Tokyo it has been since about 1991. Before, there was an unspoken agreement that the Yamaguchi-gumi would not open offices in the Metropolitan area, it now has some 750 members in 35 organizations. About 200 of these members belong to the Yamaken-gumi. It's March 15, 2003 and a group of tough-looking men in dark suits, are gathering for a Kanto-district meeting of the Yamaken-gumi. The meetings are a symbol of the Yamaguchi-gumi's increasing presence in Japan's capital as the gang shifts from its traditional Kansai-area base. Police estimate that over the past six years the gang's numbers have tripled in the Metropolitan area. The Yamaken-gumi and its leader, Kaneyoshi Kuwata, will play a large role in selecting an eventual successor to Watanabe. Kuwata, a 65-year-old boss was arrested in December 1997 on suspicion of violating weapons control laws. He was traveling in a convoy of cars from a bar in Tokyo's Roppongi red light district. Tokyo police searched all six cars in which the boss and 19 other mobsters were riding and found five handguns. Kuwata was sentenced to seven years imprisonment. Police statistics also support an increasing Yamaguchi-gumi presence in Tokyo. In November 2002 a Tokyo member of the Yamaken-gumi was shot dead outside a hotel near JR Tokyo Station. Although the background to the incident remains unclear, the person who replaced the victim was a higher-ranking member. At least 100 black-market moneylenders that can be traced back to the Yamaguchi-gumi have been uncovered.

The Osaka-based Hanabusa-gumi and its boss, Goro Hanabusa, are expected to play an influential role in the selection of a new don, watchers say. Hanabusa is considered a good friend of Watanabe. "The problem of the successor is serious," says one investigation official. It is not an orderly, formal transfer of authority that worries police and residents, but violent street battles between rival gangs fighting for power in the absence of a strong leader -- the same kind of strife that killed Masahisa Takenaka in 1985. The bosses of the Yamaguchi-gumi are getting old, and the younger members might see this as a good opportunity to challenge their elders.

On Friday June 29th, 2005 police said that Yamaguchi-gumi boss Yoshinori Watanabe stepped down and was replaced by his second-in-command Kenichi Shinoda. A source familiar with the Japanese underworld said Mr Watanabe was thought to be in poor health.