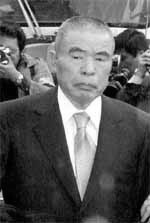 Yoshio Kodama was born in 1911 and grew up in a poor family and spent most of his childhood living with relatives in Korea. At an early age Kodama showed much interest in politics and at age 21 started his own right wing ultra nationalist political group, the main objective of this group was to assassinate the prime minister and top cabinet ministers. Before his group could do this however Kodama's plans were discovered and he was arrested and imprisoned for 3½ years. When Kodama got out he started working for that same government he wanted to kill and worked as an espionage agent for them. As an espionage agent Kodama maintained an extensive network of spies throughout Asia. He saw to it that countless shipments filled with nickel, cobalt, copper, and radium were on their way to Japan all to strengthen Japan in the war. Kodama didn't totally play by the rules however together with the normal shipments he shipped heroin. After his work he was awarded the title of Rear Admiral by the Japanese government and when the war was over Kodama was worth an estimated $175 million dollars.

Despite all the money Kodama was in big trouble after the war he was classified a class A war criminal by the allied powers and was sentenced to 2 years in prison. After those 2 years he was released on a general amnesty. Out of prison Kodama started working for the allied powers as a go between for the G-2 section of the allied forces and the Yakuza. Kodama supplied Yakuza muscle to take out orders by the political party and allied forces. Kodama and his connections were branched out throughout Japan and Asia he had enormous power. In the early 1960s Kodama used his power to organize a truce between several warring Yakuza Clans. He made an alliance between Kazuo Taoka boss of the Yamaguchi Gumi and Hisayuki Machii a Korean boss in charge of the Tosei Kai after the truce Kodama was looked upon as the Underworld's visionary Godfather and made peace between several other warring Yakuza clans.

In the mid 70s Kodama used his power to give Lockheed Corporation an 'in' in the Japanese market. Kodamo in return for a $2.1 million dollar bribe discredited an A.N.A. president who resigned and therefor made way for Lockheed. It became a big scandal when the truth came out and Kodama's good name was dragged through the mud. While awaiting trial Kodama suffered a stroke and in January 1984 died peacefully. He is still looked at as the big peacemaker of the Japanese Underworld.