Keizo Kawamura (right, who also used the surname Okamoto), a 60-year-old gangster of the Yamaguchi-gumi, Japan’s largest Yakuza group, was hanged on Thursday for his role in the kidnapping and murder of the president and a worker 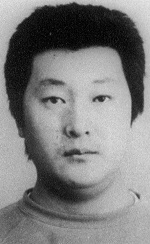 of Cosmo Research Corp. – an investment firm - in an apartment building in Osaka on January 29, 1988, after robbing him of some ¥100 million in cash.

His partner in crime, 67-year-old investment adviser Hiroya Suemori, was hanged the same day. Both men tried to hide their crimes by burying the two bodies in concrete and dumping them in a mountainous area of Kyoto Prefecture. They had been sentenced to death in September of 2004.

Japan resumed the death penalty in 1993. At the time of this writing 110 inmates are on death row and over 80 are seeking retrials. Japan’s authorities are under pressure from human rights groups and various law organizations to abolish capital punishment. The Japan Federation of Bar Associations has called to abolish the death penalty by 2020 and replace it with lifetime imprisonment instead.

Such discussions give hope to many convicts currently on death row. Like 70-year-old Osamu Yano, the former head of the Yano Mutsumi-kai, at one-time an affiliate gang of the Sumiyoshi-kai. He is currently on death row for ordering two of his underlings to shoot up a “snack” hostess club in Maebashi City, Gunma Prefecture on January 25, 2003. The attack left four people dead.

But, in light of the recent talk, he had some tricks up his sleeve to delay his own execution, a judge handling his case stated this month. How? By confessing to two murders he had previously been found innocent of. 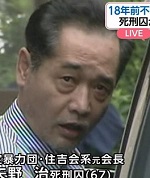 Yano (right) began his confessions in April of 2016, when he told police about his role in the murder of 60-year-old real estate executive Shizuo Tsugawa over a dispute Yano’s group had with him over a redevelopment project near Isehara Station in Isehara City, Kanagawa Prefecture in 1996. With Yano’s information, police were able to locate man’s body in a mountainous area of Isehara.

A few months later, in November, Yano also confessed to the killing of 49-year-old Mamoru Saito, another real estate executive, who had been dumped in Saitama Prefecture. Police found human bones in a mountainous area of the town of Tokigawa that were later confirmed to belong to Saito, who went missing after a meeting in Tokyo’s Toshima Ward on April 5, 1998.

Yano told investigators that the man was kidnapped and subsequently strangled to death over money problems that included a loan of ¥86 million yen.

With all his cards on the table, one presumes, all Yano can do now is wait and see if his trick pays off. For that to happen he will be depending on Japan’s government to abolish capital punishment. If that will happen before they schedule his execution remains to be seen.