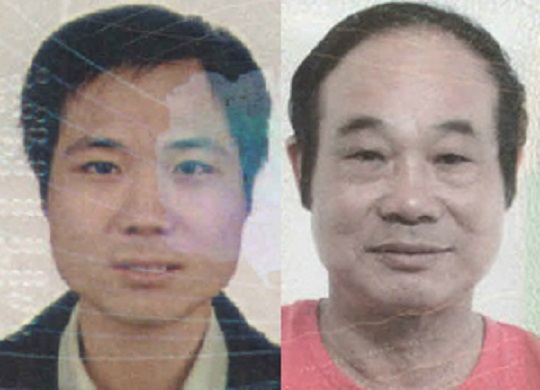 It was a family business. Father and son Guanghua and Fujing Zheng operated a drug ring that manufactured and shipped a large variety of chemical narcotics, including fentanyl, to at least 25 countries and 37 states. An indictment released on Wednesday also alleges the drugs sold by the organization led by the two men directly led to the fatal overdoses of two people in Akron, Ohio.

35-year-old Fujing Zheng, also known as Gordon Jin, and his 62-year-old father Guanghua Zheng both reside in Shanghai, China, and are charged with conspiracy to manufacture and distribute controlled substances, conspiracy to import controlled substances into the United States, operating a continued criminal enterprise, money laundering and other crimes. They face a potential sentence of life imprisonment because the drugs involved resulted in death.

The Zhengs and their partners used numerous companies, including Global United Biotechnology, Golden Chemicals, Golden RC, Cambridge Chemicals, Wonda Science, and others, to manufacture and distribute hundreds of controlled substances, including fentanyl analogues such as carfentanil, acetyl fentanyl, furanyl fentanyl, and others. They created and maintained numerous websites to advertise and sell illegal drugs in more than 35 languages.

From 2008 to the present, the Zheng organization engaged in this conspiracy from its base of operations in Shanghai. Its members claimed to ship “over 16 tons of chemicals every month” from its “own laboratory” and to “synthesize nearly any chemical on a bespoke basis in any quantity.”

The Zheng group touted its ability to create custom-ordered drugs and avoid detection from customs and law enforcement when shipping the drugs. Members explained in emails and online that it had “special ways” to “go through customs safely” in “USA, Russia, Europe,” and other locations around the world.  If customs still managed to seize the parcels, the organization promised it would “re-ship free.”

The Zheng organization used co-conspirators in other countries, including the United States, to receive, repackage, and redistribute the drug shipments, thereby hiding their Chinese origin. For example, it used companies run by Massachusetts-based co-conspirator Bin Wang to smuggle drugs past customs agents in China and the United States. Wang then shipped the drugs to customers across the country. He has pleaded guilty to his role in the conspiracy and is scheduled to be sentenced on November 13.

The Zheng organization has sent millions of lethal doses of fentanyl analogues and other drugs linked to overdoses in the United States and around the world. On February 15, 2015, Akron, Ohio resident, Leroy Steele, emailed the Zheng group saying he “would like to purchase Acetyl fentanyl.” The group explained in its correspondence with Steele that it was “a professional acetyl fentanyl manufacturer in China” and that “a lot of U.S. and Europe customers purchase largely from us monthly.”  The acetyl fentanyl that the Zheng group distributed to Steele resulted in the overdose deaths in Ohio of 37-year-old Thomas Rauh and 23-year-old Carrie Dobbins in March of 2015.

Steele was subsequently convicted of drug offenses and is currently serving a 20-year prison sentence.

Despite the deadly consequences of its actions, the Zheng organization continued manufacturing and distributing drugs as demand for its product remained soaring high around the globe and especially in the United States where drug users have been steadily increasing thanks to the opioid crisis. In 2015, it advertised that it delivered “to all 50 USA states” and “worldwide to Australia, Europe, Asia and Africa.”

When China would ban a synthetic narcotic, the Zheng organization would use its chemical expertise to create an analogue of the drug with a slightly different chemical structure but the same or even more potent effect. In this manner, they entirely bypassed China’s restrictions on international narcotics sales.

The Zheng group laundered its drug proceeds by using digital currency such as Bitcoin, transmitted drug proceeds into and out of bank accounts in China and Hong Kong, and bypassed currency restrictions and reporting requirements.

With demand at an all-time high, they had plenty of money to launder. Now, though, the time has come to pay for their crimes, which is a total different currency altogether.