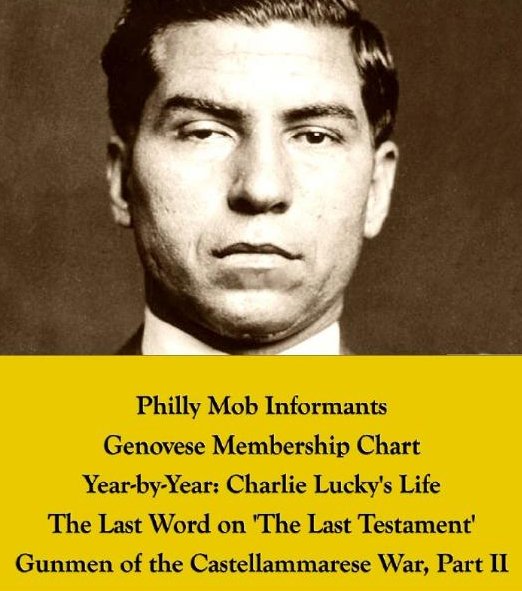 The average Mafia aficionado likely feels that he or she already knows a great deal about New York gangland chieftain Charlie "Lucky" Luciano. Just about everyone knows, for example, that Luciano survived being taken "for a ride" by his rivals, that he was nicknamed "Lucky" as a result of that episode and that he single-handledly revolutionized organized crime in the United States. Just about everyone knows those things; unfortunately none are true. The problem is that much of what is generally believed about the 1930s-era crime boss can be traced to fictional works and a single, terribly suspect Luciano biography.

In this issue, Informer takes a close look at Salvatore Lucania, a.k.a. Charlie Luciano, intending to separate fact from fiction and to establish the real-world details of his life and criminal career. A great deal of the material written about Luciano and his associates since the mid-1970s rests upon an insecure foundation: The Last Testament of Lucky Luciano by Martin Gosch and Richard Hammer.

Though often criticized by historians as the product of Gosch's imagination, The Last Testament has been widely (and inexplicably) accepted as a near-autobiographical telling of Luciano's life story. Quotes from the work have appeared in books about Luciano and his ally Meyer Lansky. Even some who have been vocally critical of Last Testament's contents and Gosch's methods have found it impossible to resist borrowing tales from the book for their own works.

In our featured article, historian Richard Warner explores The Last Testament and the claims of its authors. He compares its contents to the historical record in order to deliver what should be "The Last Word on The Last Testament".

Thomas Hunt follows up with a Luciano lifetime chronology. While the Gosch-Hammer controversy is noted, "Year-by-year: Charlie Lucky's life" is devoid of Last Testament influence.

Everybody knows that, "The Last Testament of Lucky Luciano" was pure fiction.  But it is also common knowledge that he got the nickname "Lucky" from Meyer Lansky; it is also common knowledge that he did NOT revolutionize organized crime on his own.  However, he was the main architect.  Although I believe that my great cousin did NOT create the American Mafia, I do believe he played the most significant role in its recreation.