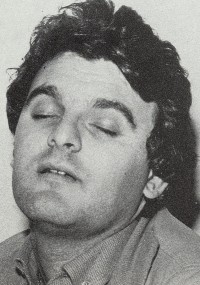 Giuseppe “Scarpuzzedda” Greco was born in Palermo in 1950. He joined the Ciaculli “family”, ran by the boss Michele “The Pope” Greco, not related to him. His father, nicknamed “Scarpa”, was a member of the Greco’s from Ciaculli, who fought against the Greco’s from Croceverde Giardini in 1940s before joining themselves in an unique “family”. At the end of the 1970s he started his escalation inside Cosa Nostra; he would become the most violent and feared killer in the mafia history, but especially the most loyal killer of “Corleonesi”.

He was the leader of the so called “death team”, including Mario Prestifilippo, Filippo Marchese, Gianbattista Pullarà, Giuseppe Lucchese, Giacomo Gambino and Nino Madonia. He was also promoted underboss of Ciaculli “family”. From 1977 to 1985, he probably killed more than 300 people. He was involved in hundreds of murders during the 1981-83 period, included several excellent murders against the institutions. He killed the bosses Bontade and Inzerillo, the most powerful of Palermo. He killed the 15 years old Giuseppe Inzerillo, son of Salvatore, and before doing it he cut his arms, saying: “So you won’t avenge your father”.

On November 30th 1982 he committed the greatest massacre in the mafia history; after a dinner in the Brusca’s lair in San Giuseppe Jato village, the “death team” murdered Rosario Riccobono, boss of Partanna Mondello “family”, together with 20 “men of honour”; their bodies were loosed in the acid and never would be found. The same day other 50 people were murdered, between shooting and disappearances, around Palermo province; the Partanna Mondello and Noce “families” were totally decimated just in a day. That was Giuseppe “Scarpuzzedda” Greco and his team. His friends said he was born with the gun in the hands. When he became too dangerous even for Riina and the other bosses, the Commission decided to kill him; it was very hard to find the shooters because everybody feared his possible reactions, and according to inquiries, in the end, his best friend Giuseppe “Lucchiseddu” Lucchese murdered him. He disappeared in 1985, while he was on the run, and his body never would be found.

Comment by Christian Giuliani on February 20, 2011 at 1:47pm
Mistakes on here: Giuseppe "Pino" Greco, aka "Scarpuzzedda", was born in Ciaculli on January 4th, 1952 (and not in Palermo in 1950). His father Nicola was nicknamed "Scarpa", that's why he was nicknamed "Scarpuzzedda" (Little Scarpa). He was a relative of Michele Greco and a far relative of Salvatore Greco. He is believed to have killed between 30 and 58 people. He belonged to a "death team", which included Mario Prestifilippo, Leoluca "Luchino" Bagarella (Riina's brother-in-law), Filippo Marchese, Vincenzo Puccio, Gianbattista Pullara', Giuseppe Lucchese Micciche', Giuseppe Giacomo Gambino and Antonino Madonia. After the arrest of Michele Greco, Riina had him killed by lupara bianca, because he was recruiting too many men of honor without letting Bernardo Provenzano and Toto' Riina know. He was murdered in Ciaculli by his best friend Giuseppe Lucchese Micciche' in September of 1985 (the day is unknown).

Comment by Christian Giuliani on February 20, 2011 at 2:42pm
Ops sorry, I meant to say "he WASN'T a relative of Michele Greco".