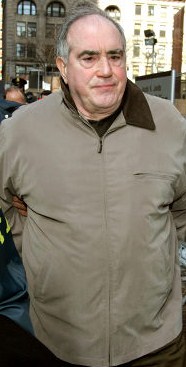 Arnold "Zeke" Squitieri was born on February 2, 1936. On August 18, 1970 Squitieri shot garment cutter Desiderio Caban five times at first Ave. and 117th St. A cop heard the shots got to the crime scene and saw a gold colored Cadillac speeding away. After a wild six block car chase Squitieri was captured and arrested. Later that day allegedly $5.000 dollars was offered to the arresting oficer and two other cops. The cops took the bribe and released Squitieri, furthermore they omitted his name from reports on the Caban killing. Later the cops were indicted and Squitieri went on the lam. In January 1972 he surrendered himself to authorities. In 1973, while awaiting trial for the Caban murder, Squitieri and his wife Marie were charged with failing to file federal tax returns for 3 years on $200.000 in income they concealed in bank accounts under phony names. For the tax charges Squitieri served 4 years in prison. In the Caban murder case Squitieri pleaded guilty to first degree manslaughter and the sentence he got ran concurrently with the tax sentence so all in all he served 6 years in state prison.

In May of 1981 Squitieri was released from prison. Soon Squitieri started dealing drugs for the Gotti crew in New Jersey. In 1982 he would meet Gambino mobsters, one of them Angelo Ruggiero, at a hot dog stand in Queens to purchase heroin. He also sold heroin supplied by Gene Gotti. In 1986 after John Gotti had replaced Paul Castellano as boss of the Gambino Crime Family Squitieri was inducted into the Gambino Family. He became a made guy. In 1988 Squitieri was charged with conspiring to distribute heroin and he was sentenced to more than 11 years in prison. On March 13 1999 Squitieri was released from prison. Within a short time of living in freedom he was promoted to capo in the Gambino Crime Family. By 2002 authorities listed him as Underboss.

Asked by Daily News reporters about his status as Underboss in the Gambino Family Squitieri replied: "I only know what I read in the papers," "It's not true. I stay in my house, I'm on parole, I have no place to go," "Forget about it..... I have no affiliation with nobody," "I stay home..... I'm on parole for the next 10 years. I can't go to New York; I can't go anywhere. I just stay here in New Jersey."

Of course (or is that too harsh?) Squitieri went back to his old life of crime. When Gambino boss Peter Gotti was arrested in 2002, Squitieri became acting boss. Squitieri was already being closely watched by law enforcement for over a year at this point. His run as underboss and acting boss would prove to be filled with trouble. Squitieri's main problem was a gang of Albanians led by Alex Rudaj. The gang started out running illegal gambling operations in the Bronx, in Morris Park and along Arthur Avenue. From there, they pushed their way into Westchester County, operating gambling dens in Port Chester and Mount Vernon, and forcing bar owners to install their illegal "Joker Poker" machines. From there, they pushed the Lucchese crime family out of Astoria, Queens, taking over gambling clubs the Luccheses had run for years. When one gambling club tried to operate in Astoria without their permission, a group of armed Rudaj members, including the three leaders, descended upon the club, known as Soccer Fever, and violently shut it down, beating the owner unconscious, prosecutors said. The Gambino Family grew concerned about the growing power of Rudaj's organization and asked for a meeting.

The meeting was held at a gas station. Rudaj allegedly wouldn't bow down to Squitieri's wishes. This angered Squitieri who pulled out a gun and pointed it at Rudaj. At that point one of Rudaj's bodyguards pulled out a shotgun and pointed it at a gas pump threatening to blow up the entire gas station. At this point Squitieri bowed down himself. To many this incident was a sign of the declining power of La Cosa Nostra in the US.

On March 9, 2005 Squitieri's run as leader of the Gambinos was over, he was indicted on racketeering charges. The charges were brought after a three-year long investigation by the United States Attorney’s Office for the Southern District of New York, the Bronx District Attorney’s Office, the FBI, and the Department of Labor. The investigation included obtaining court authorization to intercept conversations among the various defendants at several locations in Westchester County, including at the United Hebrew Geriatrics Home, located in New Rochelle, New York. Craig DePalma, son of Gambino capo Gregory DePalma, was a patient here. After it became known he had briefly co-operated with authorities he had tried to commit suicide. As a result he now lay in a coma. Gregory DePalma used the home to discuss mob business. Authorities were onto this and had the place bugged. The FBI also had an agent who had infiltrated the Gambino Family. The undercover agent was known as Jack Falcone and had gotten close to DePalma.

On April 20, 2006 Squitieri pleaded guilty to racketeering and extortion of three businesses. He admitted extorting the owners of construction companies based in Mineola, New York and Westchester County, and a New Jersey trucking company, and admitted doing so as part of a pattern of racketeering activity. At sentencing, Squitieri faces a maximum sentence of 20 years imprisonment on the racketeering count and each of the three extortion counts, and fines on each count of as much as $250,000 or twice the gross gain or loss resulting from each of these offenses. Squitieri also agreed to forfeit $100,000 to the United States Government. Sentencing is scheduled for July 28, 2006.