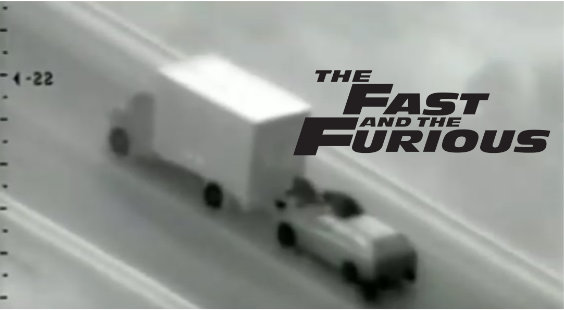 A gang of truck hijackers roamed through Europe in search of lucrative cargo. Once they found a juicy target they went all out to get their loot. Using tactics straight from the blockbuster Fast and the Furious movies, the gangsters carried out their crime while the truck was speeding over the highway.

They were a well-oiled machine, prosecutors say. Five Romanian men ranging in age from 33 to 43 worked together like Swiss clockwork. They’d better, since their job could end up maiming or killing them or their victims in horrific ways.

Their job? Hijacking trucks. In July of 2017, using a specially prepared car the men drove right behind a truck speeding across the highway between the cities of Venlo and Venray in the Netherlands at almost 100 kilometers per hour, around 60 miles per hour. Two hijackers then exited from the roof of the car and climbed towards the hood which contained a slip-resistant surface.

From here, one of the men used a grinder to open the truck’s door. After that they pulled out the cargo and moved it to their car. Again, as they were speeding over the highway. Other gang members would drive around the crew to keep other drivers and traffic at a distance.

The video below shows their Fast & Furious style tactics at another highway in Europe years earlier:

In this instance, they made off with 960 brand new iPhones worth an estimated half a million euros. After they got their booty, they sped off to safety. They laid low at a vacation resort in the Dutch town of Otterlo. They stashed their iPhones in a van in front of their cabin, their tricked-out car was nearby as well.

We know this because several days after the action-packed hijacking, police received a tip and arrested the five men at this location. They also found several grinders, the same kind used in hijackings across Europe.

On Friday, Dutch prosecutors plead their case, asking the judge to sentence the five men to 18 months in prison. Only three of them were in court. In November of 2017, a Dutch judge allowed the men released while awaiting their trial. As a result, two of them did not show up in court on Friday.

Their lawyers claim there is no evidence against the crew of alleged hijackers, saying there are no fingerprints and investigators found no DNA to link them to the robbery. All they might be guilty of, they say, is perhaps fencing stolen goods.

If found guilty, the men should perhaps consider a different career. With skills such as theirs working as stuntmen at a legit Fast and Furious filmset is within reach. All they need to do is open that door and keep on grinding.