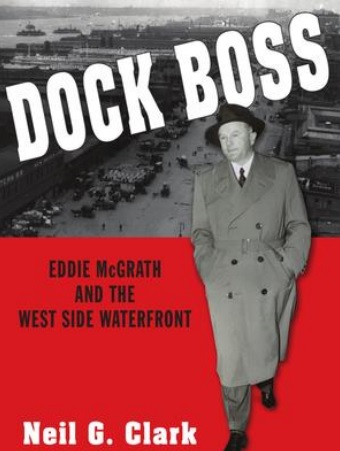 The New York docks are not for the weak, especially not during the 1930s. Back then, they were crowded by hardworking tough guys who moved tons of cargo every month, most of it with their bare hands. But despite their physical strength they were outmuscled by the city’s mob bosses. Author Neil G. Clark delves into the life of one such crime lord in his upcoming book Dock Boss: Eddie McGrath and the West Side Waterfront.

“Dock Boss: Eddie McGrath and the West Side Waterfront is the fascinating true account of one gangster's ascension from altar boy to the leader of New York City's violent Irish Mob,” Clark writes. “At a time when the Port of New York was ruled by lawless criminals, one hoodlum towered above the rest and secretly controlled the piers for over thirty years. This is the real-life story of the preeminent racketeer on Manhattan's lucrative waterfront and the bloodshed that long haunted the ports of New York City.”

Scheduled for release on July 1, Dock Boss traces Eddie McGrath's life and crimes through the tail-end of Prohibition, the gang warfare of the 1930s that propelled him into the position of an organized crime boss, the sordid years of underworld control over the bustling waterfront, McGrath's involvement in dozens of gangland murders, and finally the decline of the dock mobsters following a period of longshoremen rebellion in the 1950s.

Like walking into the backroom of a smoky West Side tavern, the book also features all the other unsavory characters who operated on the waterfront, including McGrath's brother-in-law, John "Cockeye" Dunn; the gang's hitman of choice, Andrew "Squint" Sheridan; racketeers such as Mickey Bowers, Timothy O'Mara, Charlie Yanowsky, Joe Butler and Albert Ackalitis; as well as a plethora of corrupt union officials, robbers, enforcers, shakedown artists, loan sharks, boss loaders, and bookies.

Author Neil G. Clark is a researcher and writer who has conducted more than five years of investigation on the topic. The book is based on over a thousand previously unreleased law enforcement reports on waterfront gangsters, hundreds of rare archival records, interviews, dozens of trial transcripts, and numerous newspaper accounts.

For more on this book and its author, check out www.neilgclark.com