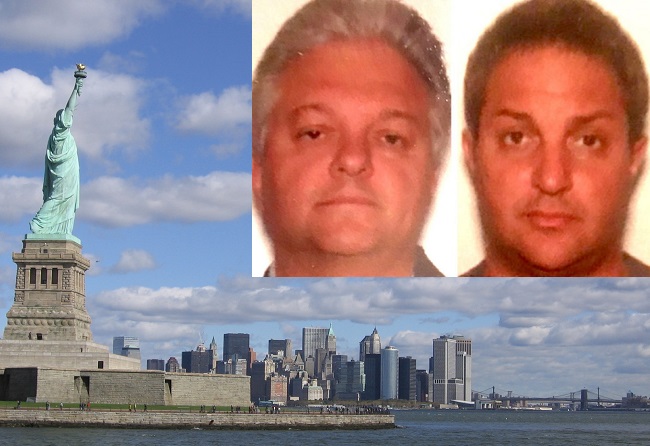 Authorities in the United States and Canada arrested a total of thirteen alleged members of the Mafia yesterday for their involvement in a largescale drug trafficking pipeline spanning both countries. Among those arrested are mobsters of New York’s Bonanno and Gambino crime families and the Todaro crime family based in Hamilton, Ontario.

“[This investigation] unearthed and dug up the roots of a partnership extending from New York City to Buffalo and Toronto to Montreal, proving once again that Italian organized crime groups have evolved far beyond the neighborhood cliques of days gone by,” Michael McGarrity of the FBI told the media.

The takedown is the latest example of Mafia groups in the United States and Canada working together in the lucrative narcotics trade. When dealing with huge sums of cash and tons of drugs it helps to be part of our thing, mobsters can trust one another – or at least, trust that since they are part of the same type of organization that everyone is playing by the same rulebook.

THE ‘NDRANGHETA IN HAMILTON Undercover operations during this project saw police purchase 6 kilograms of fentanyl and carfentanil over six transactions. These drugs could have been diluted several times, meaning three times the seized drug volume would have been distributed to the streets of Ontario today, authorities said.

If the dope wasn’t enough, they were also involved in bookmaking and the trafficking of weapons and contraband tobacco. The Contraband Tobacco Enforcement Team in Ontario seized over 3,000,000 cigarettes, which represents a loss tax revenue in excess of $550,000.

Two integral members of the Hamilton group are 51-year-old Domenico Paolo Violi (above, left) and his brother Giuseppe Violi (above, right). They are grandsons of the late Giacomo Luppino, who was known to be a founding member of the crimine, a governing body for members of the ’Ndrangheta and a longstanding associate of the Buffalo crime family. According to Canadian police the Violis have “an international reach.”

A SNITCH IN THEIR MIDST

The two were linked when, in 2015, one of the defendants sponsored a confidential informant to become a full-fledged member of the Bonanno crime family and as part of the investigation, law enforcement secretly video- and audio-recorded the induction ceremony, which occurred in Canada.

With such an insider, authorities had unprecedented access to ongoing criminal activities. Or, as stated by Acting United States Attorney Rohde: “The recording of a secret induction ceremony is an extraordinary achievement for law enforcement and deals a significant blow to La Cosa Nostra.”

According to the indictment and other court filings, Zummo was involved in a cocaine trafficking conspiracy with Bonanno associate Salvatore Russo and others introduced by the confidential informant. In one deal, on September 14, 2017, Zummo and Russo sold over a kilogram of cocaine inside a Manhattan gelato store.

Zummo is also charged with laundering over $250,000 in cash by providing business checks issued to a fictitious consulting company that purported to bill the company for consulting services. The Bonanno capo took a fee of approximately 10 percent for each money laundering transaction.

Gambino soldier Semplice is charged with conducting a loansharking scheme in which he and others extended extortionate loans with interest rates of up to 54% per year. The alleged scheme generated thousands of dollars per week for Semplice and his associates.

Paul Ragusa is charged with being a felon in possession of nine firearms, including three automatic assault rifles and one silencer. He allegedly transported the firearms in exchange for $2,000 in cash.

“Criminal enterprises, both national and international, contribute to the breakdown of a lawful society,” stated FBI Assistant Director-in-Charge William Sweeney. “And yet, the allure of this gangland culture is often embraced and glamorized in movies and on television, where the threats posed to our economic and national security are seldom displayed. Dismantling and disrupting major international and national organized criminal enterprises is a longstanding area of FBI expertise, which is significantly enhanced through collaboration with our law enforcement partners and our Canadian partners. While we have more work to do, this operation is a giant step in the right direction.”

“Those who traffic in illicit drugs and participate in other organized crime activities destroy lives and impact the safety and security of our communities, and we will continue to work to eradicate those dangers.” said Michael LeSage, Criminal Operations Officer for the “O” Division RCMP. “Project OTremens demonstrates how the combined efforts and cooperation of law enforcement agencies and other government departments, here and internationally, can work effectively to combat organized crime.”