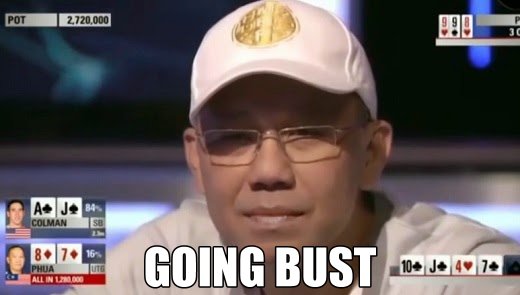 50-year-old Wei Seng Phua was known as a high roller around the world. The Malaysian played poker at the highest stakes and was known for his huge bankroll which was labeled as “a bottomless pile.” According to his own testimony he is worth between $300 and $400 million dollars. According to authorities he is worth much more. And, worse, they say he is a high ranking member of the 14K Triad who ran a billion-dollar illegal gambling operation from Caesars Palace in Las Vegas. Yet, despite their best efforst, in the end, they dropped all charges against him.

If he was, in fact, operating a large scale gambling business from three luxurious villas in Caesars Palace - after all he has not been convicted yet – then he did not worry too much about hiding that from casino personnel.

Upon arriving at villa 8881 – 8 is a lucky number in Asia – he requested an unusually large amount of electronic equipment and technical support. While casino personnel were setting up everything for their client, they noticed that it looked very similar to the screens at the casino’s sports book. Computers were displaying betting odds for games of the World Cup 2014 and gambling websites that were illegal in the United States.

The casino contacted the Nevada Gaming Control Board which subsequently determined that the set-up was similar to a “wire room” where illegal wagers are made and monitored, and that Phua and his crew were monitoring the World Cup and betting odds associated with World Cup soccer games in furtherance of operating a gambling business.

Apparently the number 8 wasn’t so lucky after all.

Because over the next month, law enforcement agents worked undercover and began monitoring the activity. On July 9, agents raided the villas where they recovered gambling records, computer equipment, and other items. As agents swarmed the place, Phua was inside villa 8882 watching the semifinal between Argentina and The Netherlands with his son. From the start of the World Cup on June 12 until July 5, the bets allegedly reached a total of HK$2.7 billion.

A week later, Phua, his son, and six others were arrested and charged with one count of unlawful transmission of wagering information and one count of operating an illegal gambling business. If convicted, they face up to two years in prison on the unlawful transmission count and up to five years in prison on the illegal gambling business count, as well as fines on each count of up to $250,000. Both Phua and his son have pleaded not guilty. 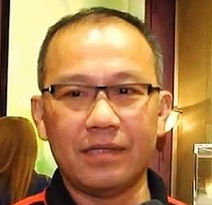 This isn’t Phua’s first run in with the law.

According to the FBI, Phua (right) is known to be a high ranking member of the 14K Triad, an Asian organized crime group originating from Hong Kong. Whether this allegation is true is difficult to confirm, however, one does wonder how Phua was then able to lead such a high profile life of riches in the United States while attending poker tournaments and organizing gambling junkets to Macau for VIPs, something he was so good at that in the first year he raked in turnover of about HK$36.5 billion. Wouldn’t such a member of one of the world’s most notorious Triad gangs be of interest to the FBI? And if so, why did it take an employee from Caesars Palace to sound the alarm?

Especially considering the fact that before this bust, Phua was arrested in Macau, along with more than 20 other individuals, for operating an illegal sport book gambling business transacting illegal bets. Phua posted bail in Macau, was released and arrived in Las Vegas shortly thereafter.

After his arrest, Phua’s influence quickly became apparent as he had famous poker players Phil Ivey, a 10-time World Series of Poker champion who lives in Las Vegas, put up $1 million and Andrew Robl post the other $1.5 million of father and son Phua’s bail.

While his poker buddies were by his side, other friends and business associates had a sudden change of heart about their relationship with Phua. Those junkets he organized to Macau? “Mr Phua has never been an employee nor a junket operator at Wynn,” Wynn Resorts spokesman Michael Weaver wrote to the South China Morning Post.

And what about his role as San Marino's ambassador to Montenegro which he fulfilled for more than three years? Well, San Marino revoked his diplomatic status faster than you can say “San Marino” after the news of his Las Vegas arrest reached political figures there. Both the Montenegro and San Marino foreign ministries told the South China Morning Post that Phua was never even formally recognized as envoy.

When the chips are down you come to realize who truly has your back.

Of course, it’s not that unusual that Phua was able to mingle and do business with the legitimate and political elite. He’s a gambler. He likes to play poker. He likes to bet on a sporting event. Who doesn’t?! Nothing criminal about that, no?

While in Vegas Phua was placing bets using SBOBet, an online betting platform registered on the Isle of Man, and IBCBet, which is based in the Philippines and Phua allegedly “owns” or at the very least is heavily invested in. Neither website is licensed to operate in Nevada.

Illegal gambling in Nevada. It reads like an oxymoron. Yet, it’s very real to Phua right now. While U.S. prosecutors shut down online poker in the United States in 2011, European poker players were still able to go all in and cash out. The line between legal and illegal is extremely thin when it comes to gambling. When crime boss Dutch Schultz ran the lottery it was illegal. When the government busted it and started up its own version it became legal and was promoted on national television to entice people to buy a ticket.

Though illegal gambling finances organized crime and criminal activity, legal gambling can finance banks and various other corrupt and harmful institutions deemed legitimate. The public loses its money either way. The business of gambling is rigged so that the casino always wins. And despite Phua’s status elsewhere in the world, in the United States he is not the casino.

UPDATE: Or is he? A judge ruled the FBI's search of Phua's villa unconstitutional after which prosecutors withdrew all charges against him.

The damage was already done. Media around the world, including us at Gangsters Inc., have branded Phua as a Triad member. Something he vehemently denies, going so far as offering proof how the FBI came to that conclusion. You can read his explanation at PokerNews.