Gregory Scarpa Sr. was known first and foremost as a ruthless mob hitman. He took pleasure in killing. While discussing a man he had murdered, he would say “I’d like to dig him up and shoot him again.” But, though it may seem unbelievable, while committing murder and mayhem at the behest of the Colombo Crime Family, Scarpa was also working as informant for the FBI. 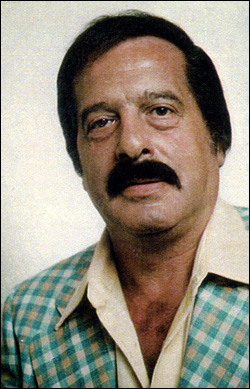 Scarpa Sr. (photo right) was born in 1928 in Brooklyn, New York. Growing up during those years, a young Italian kid would look up to the well dressed Italian men who handed out cash like it was nothing. After doing a few errands, they are brought into the fold, and “schooled” in the ways of mob life.

Eventually he became a member of the Colombo Crime Family. This was a troublesome mob family during the 1960s. Joseph Profaci was the boss, but a faction led by “Crazy Joey” Gallo decided they deserved more power and started a war to grab the crown. Joseph Gallo would remain a problem for the Colombo family until he was shot and died outside Umberto’s Clam House in New York’s Little Italy. With death around the corner and the cops always watching your every move, Scarpa was soon had an important decision to make.

In March 1962, Scarpa was arrested by FBI agents as a suspect of an armed robbery. The agents gave him a choice: go to prison or become an FBI informant and feed us information in return for a get-out-of-jail-free-card. Scarpa didn’t need a lot of time to make his decision and would eventually become, what was then called, a top echelon informant. But Scarpa was a very manipulative man and it wasn’t long before he was using the FBI more than they were using him. As an informant he continued and expanded his criminal operations. He would also commit numerous murders while a registered informant. When Scarpa was again released after criminal charges had evaporated his mobster colleagues would worry. Some would wonder if their fellow member might be a rat. But how could he be a rat when he is such a violent and successful murderer?

And there was no doubt that Scarpa was a “stone killer”. When Colombo soldier Dominick Somma put in a “beef”, or complaint, about Greg Scarpa Jr. to Colombo capo Anthony Scarpati Scarpa Sr. became so enraged it would only be a matter of time before Somma would end up dead. Months passed, but then Carmine Persico gave the order to kill Somma. He apparently had been involved in a drug deal with members of the Gambino Family without telling his Colombo Family higher ups. This crime would now cost him his life. Scarpa Sr. eagerly accepted the murder contract.

Somma was asked to come by Scarpa’s Wimpy Boys Social Club to discuss a possible bank job the crew could pull. Several crew members were present. Including capable killers like Carmine Sessa and Joseph DeDomenico. Everybody sat down at a table. Somma sat right across from Scarpa Sr. As small talk ensued, he casually pulled out a hand gun and shot Somma in the head. Then he walked over to his victim and fired one more bullet in the man’s head. Was this man an FBI informant? No way.

The FBI might not have had an interest in bringing their prized informant down. Faith had a way of punishing Scarpa. Throughout his life he had several medical problems. In 1986 he experienced bleeding ulcers and doctors told him he would need several blood transfusions. Scarpa vehemently refused any blood by a person he did not know. As a result Scarpa’s relatives and crew members lined up to donate blood. Though Scarpa might know these people, he didn’t know each person as well as he thought. One crew member was a bodybuilder who frequently used steroids. He would even share a needle with his gym buddies. At one point he was infected with HIV Aids. When he donated his blood to Scarpa he subsequently infected him with the virus as well.

After being diagnosed with HIV, Scarpa was obviously devastated. But he decided to keep it a secret and simply carry on with life. And his life, including the lives of other Colombo Family wiseguys, was about to take a dramatic turn.

While Carmine Persico and his son Alphonse were in prison, Vic Orena was running the crime family on their behalf. But he enjoyed being boss and refused to relinquish his power. Pretty soon Persico loyalists took on the Orena faction in a fight for control of the family. Greg Scarpa sided with Carmine Persico and was soon cruising the streets of New York in search for members of the Orena faction.

But Orena hitmen already had Scarpa in their sights. On November 18, 1991 three Scarpa crew members came to his home to pick him up and drive him to the Wimpy Boys Social Club. Scarpa’s girlfriend Linda and their child were also leaving the house. Seconds later several men wearing ski masks fired multiple shots at Scarpa and those standing nearby. Miraculously no one was hurt. But if it was up to Scarpa several people soon would be. In December 1991 Scarpa and his crew were out hunting Orena loyalists. They spotted Vincent Fusaro in front of the home of his girlfriend. He was on a ladder hanging up Christmas decorations. Scarpa rolled down the window of his car and fired three shots at Fusaro. All shots hit their target, and Fusaro died on the spot. 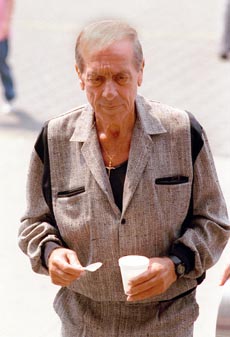 Thirsty for blood Scarpa continued his hunt. In January 1992 he and crew member Larry Mazza murdered Orena capo Nicholas Grancio. Realizing that Scarpa was a serious threat the Orena faction started plotting a new hit attempt. Joel Cacace was involved in two shoot outs with Scarpa. In one both men fired shots at each other while they were both seated in their car. In February Scarpa shot Cacace in the stomach, causing him a serious, though not lethal, wound. The war would rage on and leave scores of mobsters dead or wounded. All in all Scarpa had killed four men and wounded two others.

During the summer of 1992 federal agents arrested Orena. This arrest effectively ended the war. Carmine Persico and his son Alphonse would remain in charge. However after the war, not many members were around for very much longer. The FBI arrested dozens of Colombo gangsters on charges related to the war.

The Colombo war would also bring an end to Scarpa’s FBI protection. He was arrested and due to his deteriorating health put under house arrest while awaiting trial. By now he was a mere shadow of his former self. But he still was a killer. When his son Joey told him about how he had been disrespected by a couple of drug dealers, Scarpa picked up a gun, took his son and Joseph Randazzo, and went looking for them. Upon seeing the two men, a shootout erupted. Scarpa shot one of the dealers. His friend reacted immediately and fired several shots at Scarpa and Randazzo. Randazzo was seriously wounded, while a bullet had hit Scarpa in his face. Scarpa’s son had fled the scene.

In typical tough guy fashion Scarpa drove home. There he made himself a drink. As he was drinking his scotch the phone rang. Scarpa’s probation officer called because his ankle monitor had been triggered. After coming up with a good excuse, Scarpa hung up the phone. When his girlfriend came into the room she was horrified at what she saw. Scarpa’s left eye had been shot out and blood was gushing from the wound. It didn’t seem to matter to the murderous mobster. He knew his time was running out.

On May 6, 1993 he pleaded guilty to three counts of murder and conspiracy to murder several others. In December 1993 he was sentenced to ten years in prison. On June 4, 1994 the real grim reaper came to take Scarpa away.

A stone cold killer and an FBI rat,
You really were a man of contradictions M Scarpa.You would obviously have no problems whacking a guy doing exactly the same as You.
I heard he refused blood transfusion in case the blood came from an African American. How ironic you caught AIDS from one of your steroid fixing wiseguys,