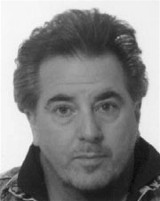 Louis "Louis Bagels" Daidone was born on February 23, 1946. In the early 1980s the FBI listed him as a soldier in the Lucchese Crime Family. In 1989 Daidone received orders that he had to kill small time car thief Thomas Gilmore. The mob suspected that Gilmore was a rat. Daidone and two associates tailed Gilmore to his home in Queens. There they ran up behind him and shot him in the head and neck. A year later Daidone was called upon again to kill a suspected rat. This time the target was mobster Bruno Facciola. Daidone lured Facciola to a brooklyn garage. Once there Facciola was certain it was a set up and ran away. Daidone caught up with him, tackled him and then dragged him back into the garage. There Facciola was held down while he was stabbed and shot in both eyes. As a finishing touch Daidone stuffed a canary in Facciola’s mouth as a sign that: you sing to the feds, you're going to get your head blown off. Days later Facciola’s body was found in Brooklyn in the trunk of his own car.

In 1992 Daidone was arrested and charged with an 1988 armored truck heist that netted $1.2 million. Daidone was eventually acquitted of robbery and weapons charges but was convicted of robbery conspiracy and sentenced to five years. In 1996 he was released from prison. In 2000 Lucchese Acting Boss Steven Crea was arrested and Daidone became Acting Boss. In 2003 Daidone’s reign was over when he was arrested and charged with the murders of Gilmore and Facciola and two counts of extortion. In January 2004 Daidone was found guilty and was later sentenced to life in prison with no chance of parole.