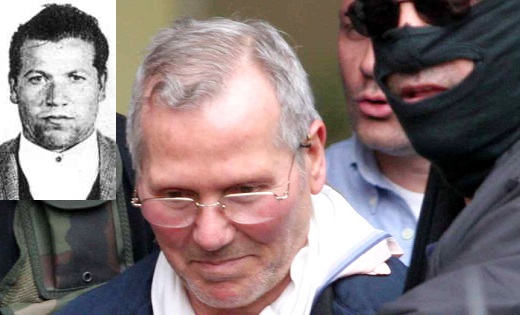 Sicilian Mafia boss Bernardo Provenzano passed away at age 83, sources told Italian news agency ANSA today. Considered Cosa Nostra’s boss of bosses, Provenzano spent 43 years on the run before finally being caught in 2006. He was serving life in prison for various Mafia crimes including the murders of anti-Mafia prosecutors Giovanni Falcone and Paolo Borsellino in 1992.

Good things come to those who wait. And waiting they did. Situated on a mountain in the Sicilian countryside near the village of Corleone, several men were patiently and intently watching a sheep farm below them. Their eyes focused for that one sign. A sign of life. The men were members of an Italian police unit tasked with finding Provenzano, the man who had become a myth and legend. He had also become a ghost. He had vanished into thin air on September 18, 1963.

Together with his boss Luciano Leggio and his brother-in-arms Salvatore Riina, Provenzano had seized control of the Mafia in Corleone, a town in the Palermo province of Sicily made infamous by Mario Puzo’s The Godfather only a few years after his disappearance. Though the fictional brutality of The Godfather in no way accurately portrayed the vicious violence Leggio, Riina, and Provenzano would bring upon not just Corleone and Sicily, but the whole of Italy. Leggio and Riina were the most blood-thirsty. Under their rule the so-called Corleonesi seized power of the country’s underworld, leaving a trail of hundreds of dead bodies and an ambiance of fear. The Corleonesi could not be seen. They appeared, murdered their victim, and vanished. Rival Mafiosi were scared to their bones. They could not comprehend the bloody game of chess in which they were being wiped off the board. The Corleonesi were a step ahead at every turn. And Bernardo Provenzano was an integral part of it.

After Riina and his cohorts were caught and sent to prison, Provenzano took control and immediately set about a change in policy. The constant violence had weakened the Mafia. Murdering Mafiosi, politicians, judges, journalists, policemen, and innocents had done nothing to increase the organization’s power. Rather, it had created a cry for change, of public outrage, of opposition against Cosa Nostra.

Though Provenzano was well-versed in the violent ways of mob life - he got his nickname “The Tractor” because he was so proficient at mowing people down, and his boss once said: “He shoots like an angel but has the brains of a chicken” - after taking over for Riina he showed he did in fact have the brains after all. He ceased the war against the Italian state and took Cosa Nostra back into the shadows, back into the business of making money.

It was the mid-1990s now and he had been on the run for over thirty years. He was running a multi-billion dollar industry of both illegitimate and legitimate businesses with thousands of people at his disposal. Yet the only thing authorities had of him was a photo made in 1959.

Rumors were flying wild. People claiming he was dead and that the Mafia used his name to send police on a wild goose chase while others said that he was living the high-life in some exotic location. Wherever he was, he seemed to have gotten away with it.

Still, a bunch of dedicated policemen did not agree. They were chasing what at times actually seemed like a ghost, but a ghost does not leave traces, does not leave signs of life, and this ghost did. Men took orders via small hand-written notes passed along by other trusted men. The notes involved Men of Honor, Mafiosi, and the affairs of Cosa Nostra. It was clear that the ghost was not dead. Not by a long shot. He was just hidden. And they were about to find his hiding spot.

As the years went by Italian authorities had continued to scrape away at Provenzano’s power, arresting several of his most trusted lieutenants and creating valuable sources of information in the process. As a result, Provenzano had to switch tactics and people to stay ahead of the law. With most of his Mafia underlings in prison, he had to rely on his own blood, his wife, sons, brothers, nephews. He depended on them for all his needs. One of those needs was getting his dirty laundry cleaned. Not the illegal money type of dirty laundry, but actual dirty laundry: underwear, socks, etc. He needed food, and was particular about it. And he needed a lot of other things. He was driving his family up the wall with his needs and specific requests.

As his family got restless with their notorious relative back near his old stomping grounds, authorities were watching and listening, trying to pick up on any clues that would give away the location of the elusive boss. As they followed the comings and goings of Provenzano’s wife, sons, nephew, agents noticed some interesting things. Like how packages that seem to contain clothing are moved around between various people. People who normally would not be bringing each other such packages. As agents followed the packages they ran into difficulties as the man they tried to follow was extremely cautious. Another problem was the terrain. The man took a drive into the mountains near Corleone, making it almost impossible to keep eyes on him without being seen. But good things come to those who wait. Once they found a point in the mountains that gave them a good overview of the area in which their deliveryman drove his car they found their final destination: a sheep farm.

As they watched the sheep farm they saw several packages being delivered every couple of days. There was something strange going on. Now all they needed was a sign that someone who was not supposed to be living there was hiding out somewhere on the premises. The owner of the farm was seen standing in front of a hut talking to someone. He would also bring food and packages inside. But it wasn’t until agents noticed an arm reaching outside the door that they knew someone was inside. After that agents rushed to the cottage, barging through the door, where they came face to face with a ghost of flesh and blood, a boss of bosses.

Bernardo Provenzano was startled, but quickly regained composure. An agent filmed the raid, in it Provenzano is filmed looking up at his captors. “You don’t know what you are doing,” he cryptically told the agents as they searched the cottage that served as home to the most powerful mafia boss in the world. Surrounded by rotting food, smelly laundry, and with little comfort and hardly any freedom, Provenzano had effectively been living in jail already. All for the good of Cosa Nostra.

In prison he was incarcerated under the 41-bis regime, which is reserved for Italy's most dangerous criminals. His family worried it was too much for the elderly Mafia boss as he began showing signs of health problems. It was later reported he suffered from Parkinson's disease.

Provenzano’s death marks the end of a life dedicated to death and destruction. Few bosses have devoted every second of their life to Cosa Nostra, but Provenzano has done his utmost best to do exactly that. His wife and children came second. His personal life as well. His health and personal comfort did not matter either. His life was about “the life.”

Now that he has passed away, he leaves behind nothing but blood and sorrow. Though his actions later in life may have prevented further bloodshed, they do not erase or make light of his violent past.

As a religious man, Provenzano now faces his maker, no doubt realizing that he wasted his life, devoting each day to deeds that can only be considered the purest of evil.