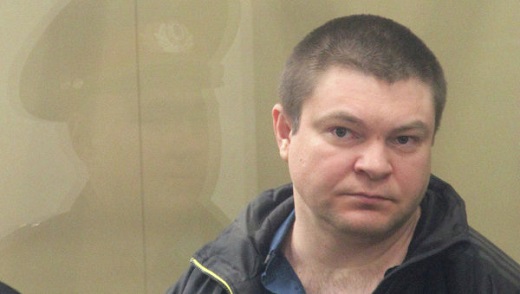 Pure evil. There is no other way to describe Russian mob boss Sergei Tsapok. He is a prime example of the totalitarian power Russian gangsters have over their respective territories. For a long time he got away with murder. But then he murdered twelve people, among them four children, and Moscow took notice.

The village of Kushchevskaya is located in the Krasnodar Territory in southern Russia. Krasnodar is also home to Sochi, which held the 2014 Winter Olympics. It’s a region where agriculture is the main source of income. And where law and order is in the hands of private militias and crime gangs.

Tsapok is the son of one of Krasnodar’s wealthiest landowners. Besides that, he is also the muscle and protector. His influence even reached into regional politics as he was elected deputy in the local government. It’s part of doing business in the new Russia where it’s about knowing all the right people in all the right places.

With the right connections one could get away with just about anything.

When his brother Nikolai was murdered in 2002, Sergei assumed leadership of his family’s militia and, as a result, its (criminal) business empire. Bound by nothing but his own sense of right and wrong, Tsapok continued terrorizing Kushchevskaya.

Olga Bogacheva has experienced that terror up close. Four relatives of her were murdered by Tsapok and his men. In 2003, her son and her husband, a business rival of Tsapok, were shot dead. At that time no one was arrested for the killings. “The gang had total power,” Bogacheva told the BBC. “Prosecutors, police, local officials - they all did what Tsapok told them to. People were too frightened to complain.” And for those who had no reason to be afraid, Tsapok had other methods, “After my family was murdered,” Bogacheva says, “Tsapok gave the local police chief a gift - a brand new Mercedes. Just imagine: the head of police driving round in Tsapok's Merc. And everyone knew whose car it was. So there was no point running off to the police to complain about Tsapok's gang.”

Without boundaries Tsapok’s lust for blood only grew. As did his boldness.

On November 4, 2010, Tsapok decided he needed to avenge his brother’s murder. He thought that his death had been ordered by a wealthy local farmer named Server Ametov. That day, he sent out his men to kill Ametov.

What happened next is something straight out of a Truman Capote novel. The hit men waited for nightfall in an abandoned house not far from Ametov’s home. Under the cover of darkness they crept up to the house and mercifully knocked the guard dog out with a tranquilizer.

They had no such mercy for their fellow human beings.

Once inside, they first killed Irina Mironenko, Ametov’s wife’s sister, and Yelena Ametova, Ametov's 19-year-old daughter-in-law. According to the BBC, “The two women had been resting along with Marina's daughters on a sofa out in the hall. Neither of the little girls survived, but it appears that one of them was strangled while the other choked on smoke from fires the killers started before they left. Alerted to the noise, Ametov left his guests at the festive dinner table to see what was happening, and was killed along with Baby Amira, who was in his arms. The murderers then went into the dining-room where they stabbed to death Mr Mironenko, Pavel's mother and Ametov's wife Galina. Lidia and Viktor Ignatenko, the parents of Galina and Marina, were also killed. When Pavel arrived and tried to escape, they shot him with a traumatic pistol, then stabbed him to death too.”

After death had spread throughout the house, Tsapok’s men started fires around the house. Whether it was to draw attention to their gruesome handiwork or as a diversion is unknown.

The house of horrors they left behind, however, was now known and visible to the entire nation. Russia was shocked. Moscow sent detectives to Kushchevskaya to help solve the case. For the first time this farm village had something it hadn’t had since the fall of the Soviet Empire: The Law.

And they went to work with the backing of the country’s most powerful boss, Vladimir Putin.

Sergei Tsapok was no match for the big boss.

In November of 2013, Tsapok was found guilty of the murders and sentenced to life in prison. Two of his men were also given life sentences for the murders. Three other gang members were given sentences of 19 and 20 years.

Normally things would end there. Life in prison. For a guy with Tsapok’s power and wealth life behind bars could be very comfortable. But things turned out very differently for the boss and his men.

On the night of July 6, Tsapok died at a detention facility. His cause of death remains a bit of a mystery with sources claiming he either died of a stroke or acute heart failure.

This normally wouldn’t be cause for suspicion. However, three members of Tsapok’s gang have recently committed suicide at detention facilities. One of the group’s principal hit men who received a life sentence, Igor Chernykh, hanged himself last Friday.

In an excellent piece for openDemocracy, Grigorii Golosov wrote “In a public statement Tkachev explicitly called Tsapok a “traitor”. As is well known, a traitor's guilt consists in betraying a key secret. And the secret of Russian politics is that crime is linked to power. Everyone understands this, but any direct confirmation of this fact hits a raw nerve.”