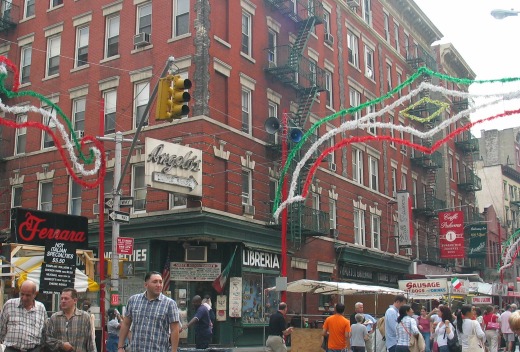 Never count out the Italian-American Mafia. With each successful prosecution, authorities claim to have rid a particular area of the mob, but, each time, that same mob pops up its ugly head again a few years later. This week, eleven members and associates of the Genovese Crime Family were charged with conspiring to extort street vendors at the Feast of San Gennaro, gambling, and labor racketeering. It was déjà vu all over again.

The biggest fish that prosecutors slapped with the indictment is 68-year-old Conrad Ianniello, who authorities allege is a captain in the Genovese Crime Family of New York. Ianniello is the nephew of Genovese boss “Matty the Horse” Ianniello and a career criminal who kept a very low profile as he rose through the ranks.

As a captain, or capo, Ianniello was in charge of a crew of mobsters. In 2008, prosecutors claim, he conspired to extort vendors at the annual Feast of San Gennaro held in Little Italy, New York. Though, the feast is nowhere near as big of a cash cow as it used to be up until the 1990s when Little Italy did not consist of just one street, apparently the mobsters still feel the urge to try and get some cash off of hardworking honest citizens.

It is interesting to note that almost two decades ago, then mayor Rudolph Giuliani, claimed the Feast of San Gennaro had been rid of the Mafia. He had been proven wrong when, as Alan Feuer points out in his excellent piece in the New York Times, “a man named Perry Criscitelli, a Mulberry Street restaurateur, who in 2004 was linked to the Bonanno crime family by a witness at the trial of Joseph C. Massino, the family boss.”

“Mr. Criscitelli”, Feuer writes, “was the president of Figli di San Gennaro, the group that runs the new, improved fair. (He quickly resigned from that position.) When Mayor Michael R. Bloomberg was asked at the time if he was confident that the feast’s operations were free of Mafia influence, he said, ‘No, but I am confident they will be free.’”

After the Bonannos were out, the Genovese Family was already going to work on the street vendors. Like a vicious circle of life that continues to thrive despite a hostile environment. It seems that no matter how hard authorities try to take them down, the mob keeps on doing the same stuff they have always done.

Like labor racketeering. Also in 2008, Ianniello, together with other members of his crew, conspired to extort a labor union. Working with James Bernardone (44), the Secretary Treasurer of Local 124 of the International Union of Journeymen and Allied Trades (IUJAT), and Salvester Zarzana (48), the former President of Local 926 of the United Brotherhood of Carpenters and Joiners, Ianniello “conspired to extort a labor union in order to induce the union to cease its efforts to organize workers at a company on Long Island. Based on their threats, the defendants allegedly hoped to pave the way for an associate’s union, IUJAT Local 713, to unionize the company instead.”

The most interesting part about this is that Bernardone and Zarzana are allegedly made members of the Genovese Family. Authorities claim both men hold the rank of soldier.

The mob has a long and colorful history in the world of labor racketeering. From New York to Chicago where the Outfit crippled Holywood by extorting unions on the West Coast, to Detroit: Jimmy Hoffa anyone? Authorities have tried for decades to clean up the unions by installing government puppets and indicting any crooked union member they came across. Seeing this latest indictment, it seems the mob hasn’t gotten that memo.

Rounding off the list of defendants are Ryan Ellis, Paul Gasparrini, William Panzera, and Robert Scalza, the Secretary Treasurer of IUJAT Local 713, all alleged associates of the Genovese family. And Robert Fiorello, Rodney Johnson, Felice Masullo, and John Squitieri.

If convicted the defendants face maximum sentences ranging from five to twenty years of imprisonment on each count.

I always thought the Families ran the Feast's vendors for years now,who could sell what where,actually renting out prime booth space to the highest bidder and collecting kickbacks from the earnings as a street tax.That was a good story and does let you know they're still there.

I use to love going to the feast every year until Mayor Giuliani step in and caused waves, since the its all down hill with the feast.. I don't like. It was a family tradition to drive up from Jersey with my parents and make a day of fun and eating like no tomorrow. No anymore, its become part of China Town and all the building that were left to families have been sold for millions. Its really sad. I would have loved for my kids to experience what I had growing up and how people of all kind became one. Oh well?

yes i too had been there in the late 90's and early years it was great, alot of bad suits though! lol