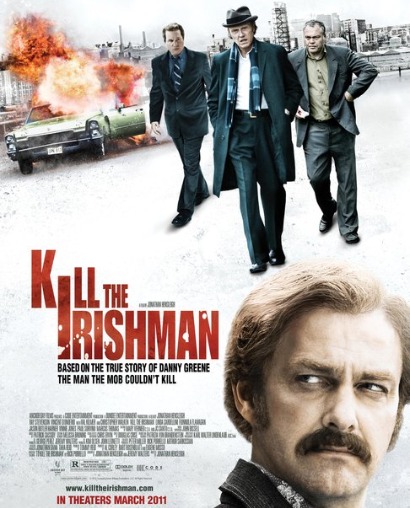 The Italian-American mobster has fascinated movie audiences for decades and Hollywood stayed loyal to its favorite movie gangster for quite some time. But now it seems a new gangster has stepped in and taken over both television and the movie theatre. I am, of course, talking about the Irish hoodlum. Whether or not the Italians will let the Irish take over without putting up a fight will be answered on March 11, 2011, when American moviegoers will be treated to “Kill the Irishman”.

Based on a true story written down by Rick Porrello in 1998, the film tells the amazing tale of proud Irishman Danny Greene, who fought a bloody war against the Italian Mafia in Cleveland. With a star studded cast that features: Ray Stevenson, Christopher Walken, Val Kilmer, Vinnie Jones, Paul Sorvino, and last but not least, Steve Schirippa, better known as Bobby Bacala of The Sopranos, this gangster movie will definitely not be ruined by bad acting. And from watching the trailer, fans of shady deals, cigars, bar fights, explosions, murder, bats, and mean mobsters on the hunt, will not be disappointed either.

And Hollywood allegedly isn’t finished with the Irish mob. According to an article in Variety “Shane McCarthy, Gil Adler, and Frank Baldwin are developing a feature version of T.J. English's mob tale "The Westies" and will produce through McCarthy's Blue Engine Entertainment and Gil Adler Prods.”

The Westies were an Irish street gang that ruled the Hell’s Kitchen section of Manhattan during the 1970s and 1980s. The gang was led by Jimmy Coonan who in turn was an associate of the Italian-American Gambino Crime Family. T.J. English’s book is considered by many to be one of the best written mob books of the last thirty years and should make for a great movie.

For those of you who long for the days when Italian Mafiosi ruled the box office: Don’t worry. Michael Mann has started work on the script of “Big Tuna”. The film will chronicle the lives of legendary Chicago mob bosses Anthony Accardo and Sam Giancana, so there is plenty to work with for the director who brought us movies such as Heat, Public Enemies, and Miami Vice.