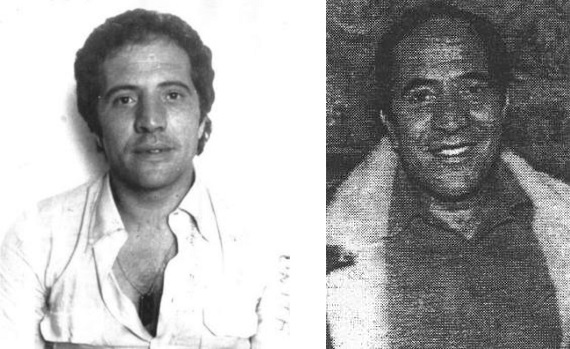 “I’m not crazy. Some of my relatives have been in a lunatic asylum, but I haven’t.” – Camorra boss Michele Zaza

Gangsters like Michele Zaza don’t come around often. Nicknamed “‘O Pazzo” or “The Madman,” he was known as much for talking candidly with the media as for his cunning and ruthless way of doing business. He fought hard and deadly - street fights and Mafia wars – and made hundreds of millions along the way.

Born in the town of Procida in the Gulf of Naples on April 10, 1945, Zaza cut his teeth as a youngster on the streets of the city of Naples. He didn’t have many options growing up in post-World War II Portici, a neighborhood stricken by poverty and crime.

Before reaching the age of 20, he had a richly filled criminal record. Theft, illegal possession of a firearm, assault, attempted murder: it was part of Zaza’s daily life. He was described as 90 kilos (200 pounds) of pure muscle. Despite his size, he never left home without his two pistols. One in the right pocket of his jacket and the second in his sock. Zaza was ready for war whenever he went out.

His hot-tempered behavior was legendary. There are mythical tales about Zaza chasing a bandit through the port of Santa Lucia while firing his pistol, finally shooting him down in the lobby of Hotel Miramare. The reason? A woman, it was said.

King of the Blondes

Such stories earned him his nickname ‘O Pazzo. It also earned him a seat at the table of the Sicilian Mafia known as Cosa Nostra. As a representative of Palermo’s Santa Maria di Gesu crime family, Francesco Marino Mannoia visited Naples in the 1970s together with two other members of Palermo crime families to set up cigarette smuggling routes. “I hated that world,” he later said. “It was unworthy of a man of honor.”

This was Zaza’s world. And with help from Cosa Nostra he expanded his world and power. According to Mafia turncoat Tommaso Buscetta, Zaza became a made member of Cosa Nostra and was part of Michele Greco’s Cupola, the Commission of the Sicilian Mafia. Over the years, he became close friends with such powerful figures such as Salvatore “Toto” Riina, Bernardo Brusca, Pipo Calo, Pippo Calderone, and especially Alfredo Bono, who Zaza called compariello, which means Godfather in Neapolitan.

The two forged a special bond on February 25, 1974, when they drove their BMW through a police checkpoint near Palermo. As cops chased after them, they failed to realize they had fallen victim to distraction. While they placed all their attention on the BMW, another car carrying fugitive Corleone boss Luciano Leggio, Cosa Nostra’s future boss of bosses, passed through without a hitch.

Cigarette smuggling made Zaza a fortune and earned him another nickname: “King of the Blondes.”

But $24 million was peanuts compared to the money he and Bono made trafficking heroin from Marseilles, France, through local crime boss Gaetan Zampa. A business Zaza denied being involved in when he is questioned by Italian magistrates.

“Say about me what you will,” he began, “but never connect my name to drugs. I am horrified by two things: kidnapping people and trafficking narcotics. This product doesn’t interest me, although I don’t want to morally condemn people who are involved in these businesses. I have children and every day I pray to the Madonna that she will protect them, when they are adults, from the sins of the game and drugs.”

Several Mafia turncoats and authorities in multiple countries disagreed. The DEA kept an eye on Zaza ever since January 1982 when they received a tip that Zaza was behind a package of 52 kilos of heroin discovered in New York.

Regardless of how he earned his money, it can not be refuted that Zaza earned hundreds of millions. American dollars, Italian lires, English pounds, French francs, and whatever currency he felt comfortable with. It was a fortune that came in handy when a full-blown war broke out between two factions within the Neapolitan Camorra in the late 1970s.

In 1970, Camorra boss Raffaele Cutolo formed a new overseeing Camorra organization called Nuovo Camorra Organizzata (NCO). Cutolo had spent many years behind bars and created an ideology that attracted many convicts and youngsters who had no hope for the future. More and more joined his organization and got involved in extortion and cocaine trafficking.

The established Camorra groups, including the one headed by Zaza, joined Cutolo’s NCO and gave him a percentage of their profits. These groups made most of their money shipping cigarettes and heroin and had moved on by investing in real estate and legitimate businesses.

But the partnership began to disintegrate. In opposition to Cutolo, Zaza founded Onorata fratellanza, the Honorable Brotherhood. Then the NCO encroached on the territory of the Giuliano Clan, which controlled the Forcella neighborhood in the center of Naples, and also demanded a piece of Zaza’s illegal gambling operations in his personal fiefdom of Portici.

In the years that followed 1,500 people were murdered. Zaza was not one of them. His wealth bought him estates in France and the United States. He bought a luxurious mansion in Beverly Hills, Los Angeles, worth over $1.5 million dollars and set up a heroin refinery in the south of France using old French Connection contacts.

Away from Italy, he hoped to be able to be shielded from police investigations. Unfortunately for him, it was too late. Police arrested him in December of 1982 in Rome. Claiming his health was in bad shape, he was able to get house arrest while awaiting trial.

He actually was in bad shape. He had chronic bronchitis and frequently fell ill with the flu. But authorities claimed he was abusing his sickness to escape justice. Anti-Mafia judge Paolo Mancuso said: “The only, real therapy for Zaza was a surgical operation. His refusal to undergo such a procedure is proof that he is using his illness to gain certain advantages during his trial.”

He added that Zaza “didn’t hesitate to worsen his health by smoking profusely and trying to raise the stress of his capture to a maximum”. As such, Zaza was among the first Mafia bosses to use health issues to beat the system.

It worked. In late December of 1983, he fled to Paris. He stayed under the radar but was caught because of his love of football. He made a phone call to Rome to inform about the result of the match between Juventus and Roma. On April 16, 1984, police arrested him in front of his apartment on the rue des Belles-Feuilles in Paris.

A Kingpin in France

He was extradited to Italy only to escape again. This time, he settled in the southern French city of Nice. Enjoying his wealth and the sun, he continued doing what he did best: moving heroin and cigarettes. His colleagues still looked up to him as a figure of knowledge and respect. On February 14, 1989, he held a high-level meeting at the Elysée Palace hotel in Nice between Camorra bosses to discuss the smuggling of narcotics. Authorities say he held similar meetings at the Hotel Méridien.

Though he was out of reach of Italian authorities, those in France were on his tail as well. They busted him eventually and handed him a 3-year prison sentence in 1991 after convicting him of smuggling cigarettes. After his release from prison, it was like Zaza was caught in some kind of loop. In 1993 he was arrested yet again. This time for his involvement in a cocaine pipeline with members of Cosa Nostra and the Camorra.

He was extradited to Italy where his health quickly deteriorated while locked up in a cell. He was moved to a hospital in Rome where he succumbed to a heart attack on July 18, 1994.