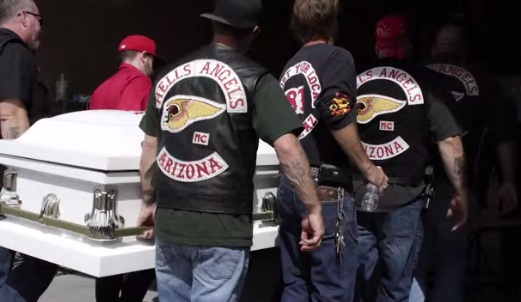 This past Saturday, the Hells Angels held a huge funeral procession for Patrick Eberhardt, the treasurer of the club’s Cave Creek chapter located in Arizona. Eberhardt was shot on February 7, while riding his bike in Phoenix together with six other Hells Angels. A hang around was injured in the attack but survived. 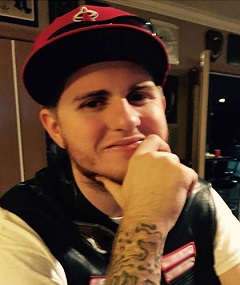 The bikers gave police no information as to who was, or were, behind the attack.

Why someone decided to fire shots at six Hells Angels remains unknown. Whatever the reasoning behind it, the result is the same. And the notorious outlaw motorcycle club lost a valued member. A video of the funeral was posted on YouTube and is evidence of Eberhardt’s high stature within the club as his brothers bid him farewell.

Watch the video below.

Online, fellow bikers and supporters also paid their respects to Eberhardt (right). On the Facebook page of the movie Dead in 5 Heartbeats, based on a novel written by Hells Angels founder Sonny Barger, a post reads, “Patrick Eberhardt was one of the REAL [Hells Angels] Members who participated in our film. He was killed on February 7th. We are all greatly saddened and will miss him dearly. His final ride was on Saturday. May he Rest In Peace.”

On a Hells Angels support page, a blogger wrote: “I don’t care how tough you are; when you see a kid this young, taken from this world way too soon, taking his ride to the Forever Charter… well, if it doesn’t affect you, you’re a bigger man than me. RIP Patrick Eberhardt. Profound love, loyalty, honor, and respect to you and your brothers.”

despite what most people think (but don't say out loud) about the Angels I found the few I had dealings with in NYC to be the most Honorable people I came in contact with, may they be around for a thousand years.